Not a stroke of luck, but hard work 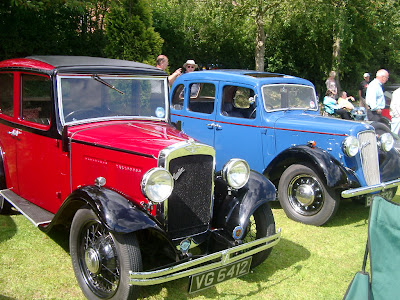 My favourite group has returned and, as often happens, bank holidays fall in the middle, two of them in the next three weeks. Never mind, it will still be a lovely time especially, if we carry on as we have begun!

One of the men, after three strokes and then the discovery of a heart problem, now known to be the reason for the strokes, is back on form, right on top of his life again.

Step by step he has achieved so much in a relatively short time, considering the set backs. He returned to work for a while, then he retired. He re-joined the carnival commitee and later stood for election as a local council candidate. Now he has at last achieved something that he has been trying to organise for at least six months. On his birthday just three weeks ago his new car was delivered, complete with big red bow, and a few days later the radio-controlled control panel that he needs was fixed to the steering wheel.

Not only has he got a new fully adapted car. He has also got all the papers he needs and with them the permission to drive it.

He arrived in style this morning, beaming from ear to ear in his shiny silver car. He told us of his new-found freedom and also about the difference that it makes to his family and their life together, especially to his wife. She works full-time as a teacher and until now has also been running him around in her car to various appointments in the afternoons and evenings. His son, when on a late shift brought him to his condutive education sessions, in the school holidays he came with his wife.

Now that has all changed, he comes on his own!

Oh, how nice it was to see his face and hear that word: “Freedom”.

That was the first word that came from my client each and every time that one of my colleagues asked him what the most important thing was about being able to drive again.

It was lovely to observe how one by one my colleagues came out of the building, as they saw him arrive, to congratulate him. It was great that they all realised what a special day it was and wanted to share it with him.

One lady in particular who is a real car person was especially thrilled to witness this moment. As the rest of the group members started to arrive they too came along to take a look. There was soon quite a crowd gathered outside.

The whole group have been talking about this big day for months now, with reports being given on this or that paper that was needed from this or that doctor. Details about which office needed to be visited next and the one after that and then about the wrong papers being sent!

It went on for a long time. It was not an easy procedure, one that another client had given up on because, without a car to get him from one office to the other, it had all been too much for him.

We hope now that we have someone amongst us who has beaten the system it will be easier for others. Now that one of the clients talks about the return of his freedom since he began driving again, describes himself as a man who feels that he is his own man again, perhaps there will be the motivation that others need to give them the courage also to give it a go.

I am sure our driver will be doing his best to encourage others to defy the powers that be, to step past all that burocracy and shout out loud that they too have the right to an independent life.

That really was a lovely start to our new spring sessions for adults.

And to end it all we have somethng else to look forward to. We have been promised a ride in the car, to a village where we will sit in the café, drink coffee and eat cakes, to celebrate all our successes.