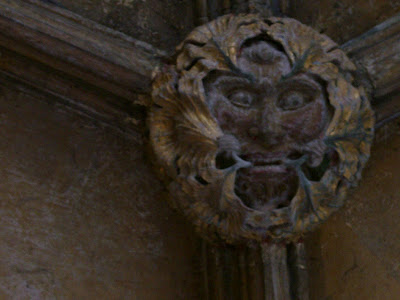 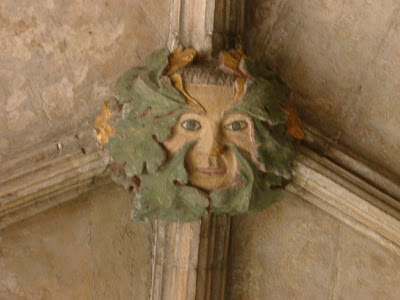 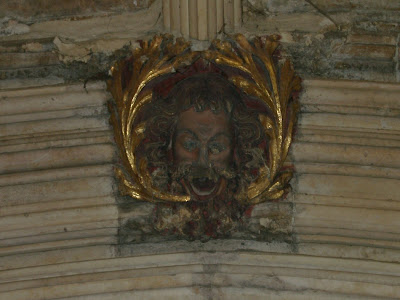 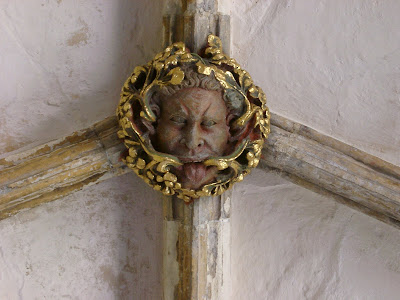 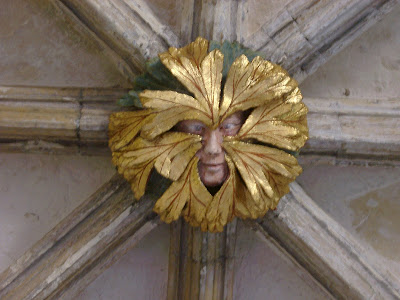 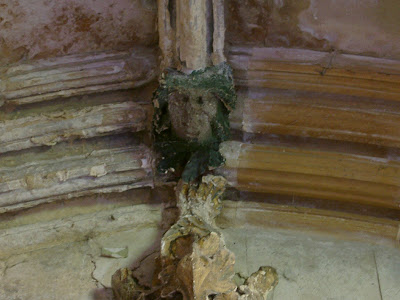 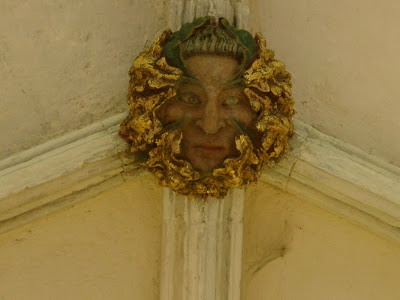 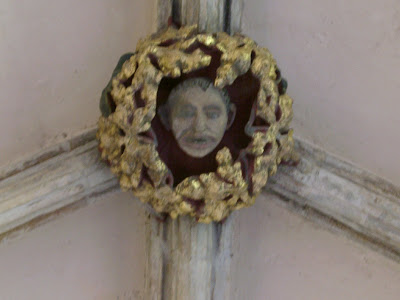 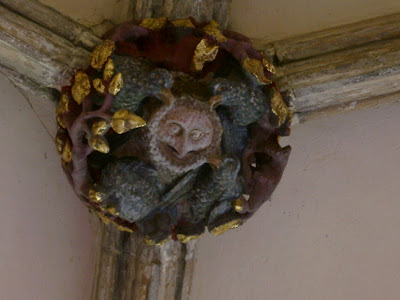 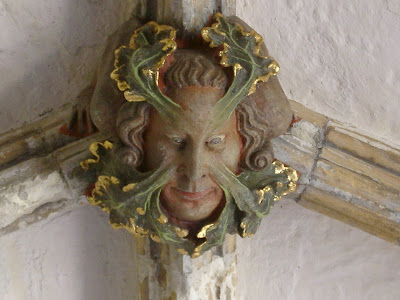 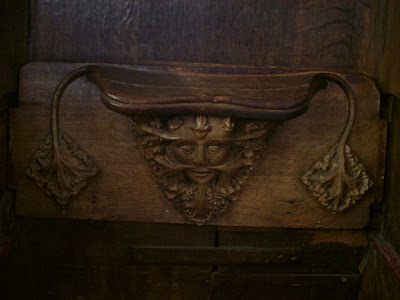 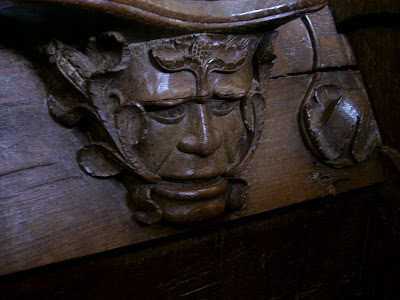 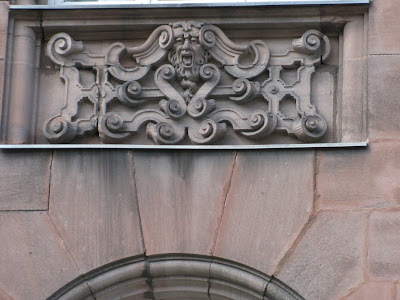 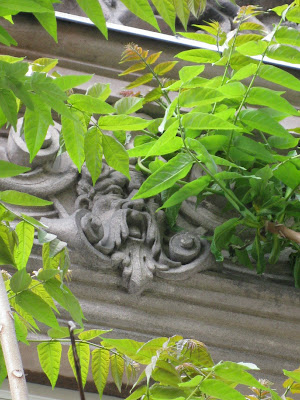 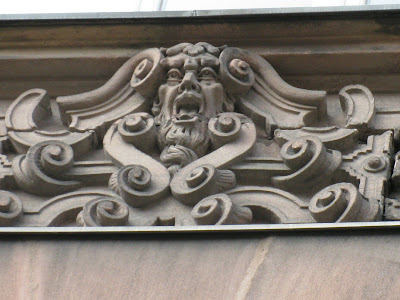 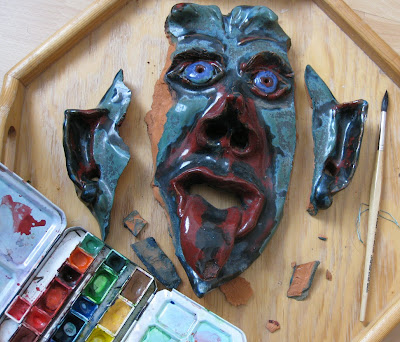 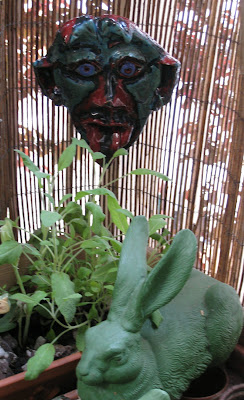 Back in his rightful place among friends 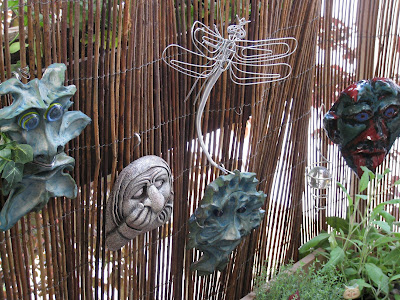 I was going to write a conducting posting but as it is Bank Holiday weekend I decided it is more appropriate to write a bit about my life and not about work. It is all conductive anyway.

Green men in my life

I have been interested in green men for as long as I remember. As a child I discovered them in our cathedral in Norwich.

Norwich Cathedral is famous for its ceiling bosses, both in the main part of the building, in the nave and transepts, and also in the cloisters. As a very small child my favourite boss was the one depicting Noah and his Ark but as I grew older and visited the Cathedral with my school, I discovered that there are also the green men and these are still my favourite to this day.

Not only are there so many of them peering down from the ceiling bosses in the cloisters, some of them really scary, there is also the best green man that I have ever come across hidden under one of the misericords in the transept. Norwich is famous for these lovely oak seats too and, as well as a few surviving old ones, there is a series of new ones in the choir stalls, with carvings depicting modern life. There is one seat with a carving of the Norwich City Football team hidden beneath it, produced durinng one of the team's highlight seasons (one similar to this last one).

Whenever I take the route to the city that leads me through the cathedral close I take a detour into the cloisters to gaze at my favourite men.

I have discovered green men all over the world. There are many in Germany. I just happened across some beautiful ones in Bamberg, and there are even a couple on the front of the Lorenz Kirche in Nürnberg. I have seen them in Paris too but funnily enough I do not remember ever having seen one in Hungary. Surely they must be there too.

As well as green men I also love the grotesque, and sometimes funny, gargoyles and water spiers that peer down from above on most churches. The best of these must be on Notre Dame in Paris ,although St Sebald’s church in Nürnberg comes a very close second.

However much I read on the subject of theorigins of green men, I am really none the wiser. They are there to be found all over the world. and nowadays not only in religious buildings.

As stated below, in the description of the Norwich Green Men, the image has remained popular for a long time.

“The abundance of versions of the Green Man in medieval buildings attests to the ongoing significance of natural imagery in the religious life of the period. The original meaning surrounding the Green Man, probably that of rebirth in springtime, has been lost across the centuries but the image has remained popular.”

The imagine of the green man is so popular that sometimes you can not turn round without finding one, as was the case today.

Holiday weekend, and so very quiet out on the streets of Johannis and, as an added bonus, the sun shining down on us at long last after weeks of cold, damp drizzle. So cold that I abandoned my bike again for a few days.

Today I decided to enjoy the warmth of the sun by talking a walk through some neighbouring streets that I have never walked in before. I have cycled in most of them but on a bike I tend to have my head down on the look out for pot holes and tram lines rather than lifting my head to peruse the interesting nineteenth century architecture towering four or even five storeys above me.

I discovered during my walk today four green men. I expect that there are even more hidden away in private courtyards or as yet unnoticed by me high up on facades in narrow streets.

Not only did I find four green men in Johannis, I also discovered a Turkish and an Indian restaurant, a second, second-hand shop, a doll-making workshop, the restored ruins of a 1534 church, a strange oldie-worldly bakery and café, like something out of a Dickens novel, a lingerie shop, and a Greek restaurant advertising continuous World Cup coverage. So I know where to go when England reach the finals!

Back to the green men

I do not only look at and photograph these green men and other weird gargoyle faces, I also make them and paint them when given the chance.

The flat that I lived in for the first ten years in Nürnberg is adorned with one of my glazed terracotta figures. It encloses the microphone and speaker, at the front door. I have often wondered what it must be like when a face, similar to the red and green one in the pictures above, greets visitors as they ring the door bell .

The one in the photograph above was a reject, coming out of the glaze firing having lost a layer of clay from the back. Another reject is on the wall beside the back door at my Dad’s house. Mine eventually ran out of luck with the weather this winter when water froze in the cracks and he lost his ears. With a botch job with the glue that I went into town to buy two weeks ago, he is back in one piece and taking his place again on the balcony between the other creations.

http://www.cathedral.org.uk/historyheritage/art---collections-misericords.as
Posted by Susie Mallett at 21:21