From Yogi to Schusie in two years! 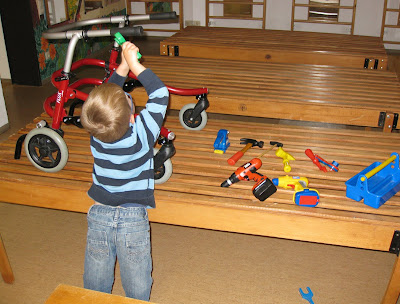 "Another good use for a plinth" 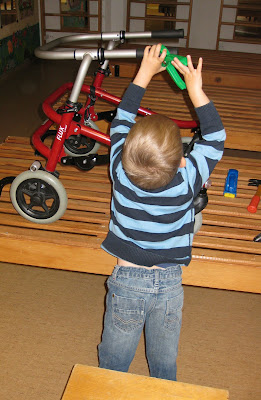 I was thrilled on Wednesday to suddenly hear "Schusie" being called from the other side of the room. I really could not quite believe my ears. It was a similar experience to when I first heard someone call out "Frau Mallett" in the Post Office, I didn’t realise it was me who was being summoned.

On Wednesday five-year-old littlie with the wonderful blue-rubber glasses, that unfortunately are not available in adult sizes, was mending his rolator on a plinth. Actually I had mended his rolator on the plinth with my bike tools and he was doing a grand job finishing it off. Fortunately his hammer was made of plastic!

This was the littlie, the only German speaker in our five-man group, who mis-pronounces many words, but does so irregularly. This means an S can be either a Y or a G, or something else completely. A U can be an E or an I, or once again something else completely different. He keeps us on our toes guessing what he is telling us about, and he tells us a lot, hence the call from across the room, "Schusie!" He had something to say and he wanted to say it to me. I jumped for joy as this was the first time in two years, despite me, colleagues and other children telling him otherwise, that he had not called me "Yogi"!

An S became an S or a Sch, and a U became a U, and for three days in a row I have been "Schusie".

"Yogi" has not been completely wiped out of the CE dictionary, as so many other children have heard this name over the past two years that it has stuck. Children in the Kindergarten and the staff still call me "Yogi". The older children and some staff call me "Uschi", another name from years gone by given to me by a child whose speech has developed so much that she now calls me "Oosie".

Back to the little boy with the lovely bouncy, blue-rubber glasses. He is so naughty. He rarely wishes to please either himself or us by behaving, by joining in or doing well. But the praise that he gets when he suddenly pronounces something well motivates him to say the word corrrectly from that moment on.

The same pleasure came into his eyes when he suddenly realised in the middle of a froggie-lift-up-your-bottom game that he had stood up, and was still standing, all on his own. No hands, no wall bars, no walking bars, no rolator, no chair, no stool, no conductor. All alone!

After the realisation the standing lasted fractions of a second as after the appearance of the light in the eyes and the smile on the lips came the giggling and the jumping for joy. Luckily we were there to catch him!

He has a very unusual condition. With his ataxic-like symptoms it is still not possible for him to clap with excitement and remain on his feet. He loves standing alone so much that he has quickly learnt to show his pleasure with a smile and a "Look at me, Schusie" so that he can keep control over his arms and legs.

The bike tools were well used this week. They came out again when my colleague discovered a puncture in her bike's rear tyre. She has a husband, I don't. That makes a difference when it comes to mending punctures. As her husband was at home and not with us work, I fixed it for her in twenty minutes, and we made our cold ways home.

We of course did the repairs conductively, she would now know how next time. But she tells me that when she makes the mistake of bumping up the pavement with not enough air in the tyre again having a husband at home will still come in handy.

I had a Spitfire-mechanic for a Mum. When I was eighteen and about to leave home with my own raleigh bike, it was Mum who supervised me during the long summer holiday as I dismantled, repaired and put together again her 1939 Raleigh. It is not only I who am thankful for that conductive upbringing, this week was not the first time that my tool kit, that is always in the bike bag, and my Spitfire-mechanics knowledge has come in handy.