Its black over Will’s Mother’s 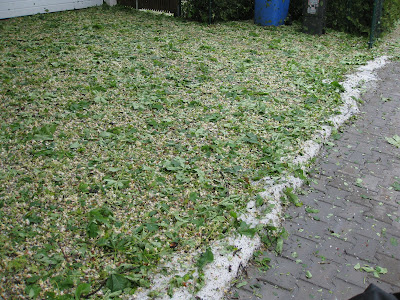 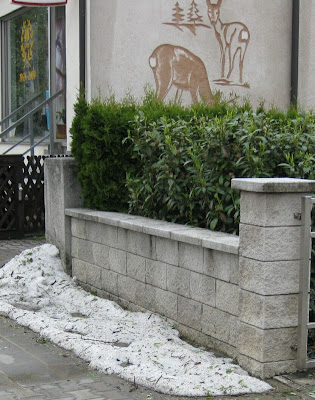 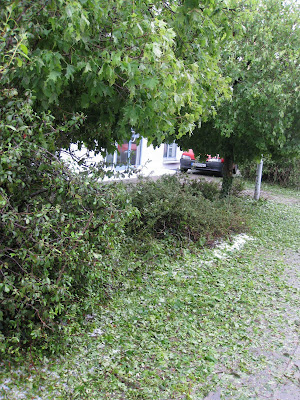 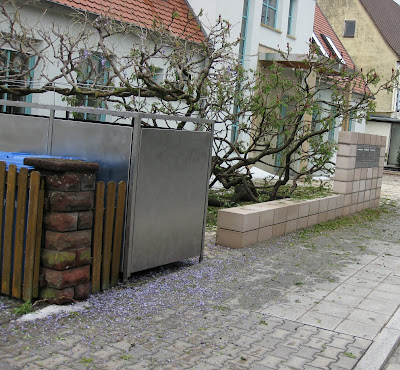 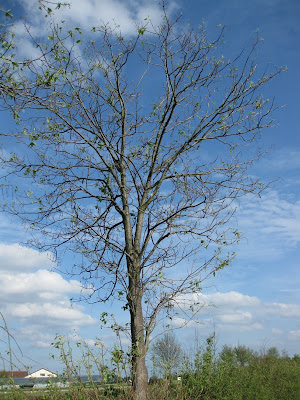 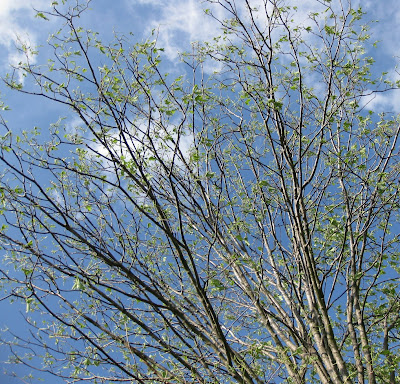 Last night I left work at eight, just as the sun was beginning to disappear behind huge black clouds. I cycled as fast as I could in the direction of Nürnberg with the clouds close on my tail. They caught up with me ten minutes from home when I sheltered for a second or two under a deliciously scented may tree (hawthorn). The raindrops were huge and the hail stones getting bigger and bigger, as were the black clouds. The hail stones were really loud as they bounced off my helmet so I decided pretty quickly that it was not a good idea to hang about. I cycled even faster than I had been before and somehow outrode the storm. As I arrived in Johannis the streets were as dry as a bone but the ever-darkening sky was being lit up now and then with brilliant flashes of lightning.

By the time that I had packed up my bike for the night the heavens were rumbling quite loudly too, I must admit that I was not very happy to be outside!

I was soon indoors, though, safely behind closed curtains, and it was a good forty-five minutes before the rain came belting down. I tried to get on with answering the day’s emails and planning a couple of postings for my blog, but to no avail. The flashes got brighter and the bangs louder and, as soon as they became almost simultaneous, I shut everything down and went to bed, snuggling under the bedcovers with a forgotten Christmas present book, "Dear Fatty" by Dawn French, to keep me company. Just the right thing to make me smile and take my mind of the storm.

It was all blown out this morning. It was warmish when I took a peek out on the balcony at 8.30am but still I wrapped up warm with a scarf and put gloves in my pocket just in case. I was right to be prepared. My nose for the weather had stood me in good stead. As I got nearer to work the colder it got, but I was not prepared for the shock at what awaited me as I entered the village.Everywhere it was white, with many trees stripped bare like in winter.

The pavements were covered with bright green leaves, white hail stones that were still there from the evening before, purple wisteria petals and pinkish-white horse-chestnut flowers, and the vines were stripped bare. It looked amazing, from another season, a new season!

Many people were out and about tidying up, tying up trees and bushes, sweeping up the leaves, clearing the pavements of slippery ice, rescuing what plants they could from newly planted gardens.

I had been lucky, I was told that the hailstones had been walnut-sized.I did spot a few dented car-bonnets so I suspect that this was no exaggeration.

On the way home this evening I took some more photographs of the trees. Several of them leafless, as in winter. I wonder whether more will grow?

A few years ago there was a similar storm later in the year, just as the cherries were ripening. The leaves were stronger by then and were hardly damaged but the cherry tree at work was stripped of its fruit, which all lay deeply frozen on the ground, already inedible when the storm had passed over. This year the cherry blossom is all down so we will not be harvesting any fruit for the children to make cherry cakes as we usually do.

This evening I cycled home in the cold sunshine. Better weather is forecast for our bank-holiday tomorrow.