PS to "Stars in your eyes" 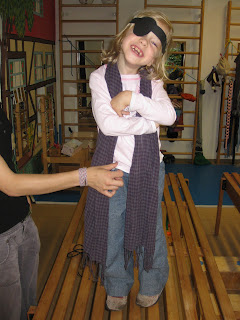 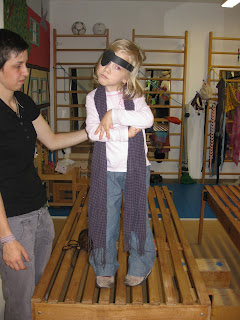 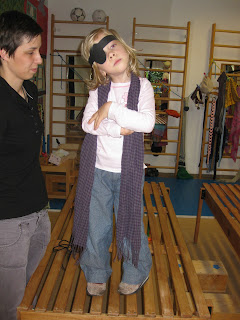 "Our Pirate Princess" by Susie Mallett, 2011
I have had a few positive responses to the video-film link that I posted on here yesterday. Some people said that they wished that they could speak German, others said that the film needs no translation, it speaks for itself.
As I had already done a rough translation in long hand before the letters came in, I have typed it up and here it is just in case anyone wants to know exactly what is being said.
You know, it may be very important for someone to know that this child wants to be a vet, and has done since as long as I can remember. I have been working with her and her parents since she was two-and-a-half. Perhaps she did not know then but she certainly had veterinary surgeon as her dream profession when she was five when she got a chance to saw the legs off my dinosaur!
http://www.susie-mallett.org/2008/11/name-that-dino-in-one-two-three-four.html

Fame for the day!
Franken Fernseher, Susanne Ratke (FF):
Felicia is a ray of sunshine, after just one look at her you can recognize that. You can also see that she is a bit different. She suffers from a disturbance of the muscle and nervous system and has difficulty speaking, the results of oxygen deficiency at birth. Despite this it has always been clear to Felicia’s parents that she will attend a mainstream school.
Mum:  “After we realized that she is an absolutely normal little girl as far as her intelligence is concerned we did all that we could do that she could attend mainstream school. So that she would get the chance for a normal life, that is to say, to be in a normal educational field with the possibility to learn a profession. She has contact with healthy children and will not become isolated.”
FF: “Are you a good student, Felicia?”
Felicia: “Yes”
Mum: “Felicia is very excited.”
FF: That is no wonder, today is no ordinary day. Firstly is the TV there and secondly now it is time to go off to school.
Every morning at seven-thirty Felicia is collected by a driver to be taken to her school.
There she is in the third year. She is eagerly awaited in front of the school. Not only by her classmates.
Esther Busch: “Good Morning Felicia”
FF: Esther Busch is Felicia’s school assistant and since her first day at school these two have been a team.
They spend each school day together because totally without help this little girl would not be able to attend the school.
Esther Busch: "Felicia is a very happy person. She gets a lot of enjoyment out of life. She smiles a lot, that is one thing and she has a very strong will. She wants to do as much as she can herself. When I want to help her too much she looks at me out of the corner of her eye as if to say no, or she says “me, I want to do it myself.”
FF: It is this, through giving her the possibility to work alone, that Esther Busch gives this eight-year-old the strength to be as independent as possible. This is also made possible through the help of her classmates.
The teacher, Bianca Löwe knows that also the other children benefit from Felicia’s presence.
Teacher: “When I spoke to the class about the Franken Fernseher team coming to us I discussed together with the children, the possible reasons for them coming. Oh what a lot of things they listed!
I kept digging deeper until eventually a pupil said: “Well perhaps it is because of Felicia”. They got to this conclusion only because I gave them lots of clues. Felicia is a child just like all the others too. She is a prize for us, right along the line!”
FF: Felicia’s neighbour at her desk also explains how well Felicia is integrated:
Pupil: I like to help her, yes and I fetch things for her. Yes I enjoy sitting next to her.
FF: And she likes to go with her during the break out to play.
Pupil: “Felicia on three we run away, Ok? One, two three go!”
Esther Busch: “Playing catch from post to post, and as she can now run really fast with the rolator, she can keep up with the other children.”
FF: This example with Felicia shows that inclusion can work when everyone who is involved is willing.
Through attending the Hegel School Felicia achieving success in her dream profession is also one step nearer.
Felicia and Mum: “Veterinary surgeon”. “OK, we will have to see if something like this is possible in the future.”
FF: The wish to attend a mainstream school has been fulfilled for Felicia and her family, and who knows what more Felicia can achieve she is certainly not lacking in motivation.
Posted by Susie Mallett at 23:37

Thanks for posting, Susie.

You are welcome, Kasey.

I loved doing it. It meant I could watch the film over and over again while I tried to catch each word!

Sometimes I forgot that I was supposed to be translating, I got so absorbed in the pictures so I had to begin the film again!

Hope you are well.
Susie