Halloween is almost upon us 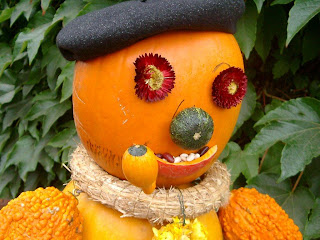 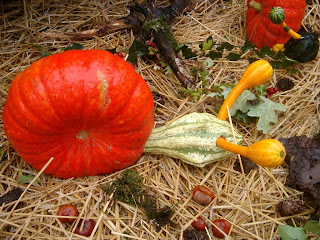 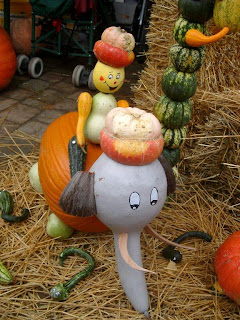 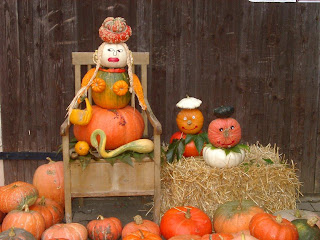 Halloween in Altendorf, Germany
All Hallow’s een (eve)  and All Soul’s Day
In Norfolk
I hardly knew about this festival when I was a child, and if we had we would not have been allowed out on the streets trick-or-treating.
In Surrey
I think that the first time that I really encountered it in the south of the United Kingdom was as a young adult, when cycling down the garden path between the fence and the garage as I did each evening, late, after work I received a bit of a shock. I was tricked for not being at home with a treat!
The young neighbour’s must have known that this was my regular path, because on 31st October, 1981 I cycled through a mist of toilet-paper streamers towards the back gate. There was a criss-cross of softness that I could feel but could not see, in the shadow of the buildings and the darkness of that drizzly night.
In Mexico
Seeing all the decorations and the skeletal toys on sale for the festival of All Souls in Mexico, was the first time that I really saw a relationship between All Hallow’s  and the Halloween that  most of the world now celebrates.
In Roman times in Britain
In Roman times there were festivals at this time of the year to celebrate the goddess of fruit and seeds, and the festival of the dead.
In Germany today
In Germany and in Hungary  Halloween has become a popular fest for children only in the last few years, but I have always enjoyed seeing the graveyards on November 1st when they are full of flickering candles and the graves laden with offerings of bowls of autumn fruits and flowers. It is a holiday in Germany so the graveyards are always full of families too, remembering loved ones who have died.
In Scotland and Ireland
In Scotland as far back as the sixteenth century there are records of festivals on the Eve of All Hallows and the Scottish poets John Mayne and Robert Burns both wrote about the pranks that were played at Halloween In the 18th Century.
In the middle ages it was customary to go souling on the eve of All Soul’s Day and in return for prayers to the dead rewards of food were given.
In both Scotland and Ireland people went guising way back in 1895 dressing up in costumes to visit houses where they were rewarded with fruit and cakes.
In the Americas
It was not until the 1920s that records show that the custom has spread over the Atlantic where now Halloween is celebrated with more pomp and circumstance than probably anywhere else in the world except perhaps for Mexico.
Where is this all leading to?
While we are busy collecting pumpkins and all kinds of materials to decorate them with the parents and their children are busy designing or buying costumes.
I was Internet searching last week for a few new arty crafty ideas for the pumpkin designs when quite by accident I discovered something that I wanted to share with all you conductors and parents who are now frantically searching for new ideas for costumes.
If you scroll through the images on the following link you will find some jolly good costumes for the clients we have who use a wheelchair to go trick-or-treating:
http://pinterest.com/chantal_mullens/costumes-and-make-up-halloween-diy/
Notes
Costumes for wheelchair users -
http://pinterest.com/chantal_mullens/costumes-and-make-up-halloween-diy/
Halloween -
http://en.wikipedia.org/wiki/Halloween
Mexico’s Day of the Dead -
http://en.wikipedia.org/wiki/Day_of_the_Dead
Posted by Susie Mallett at 18:54