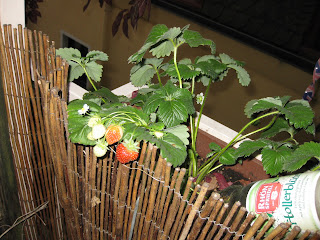 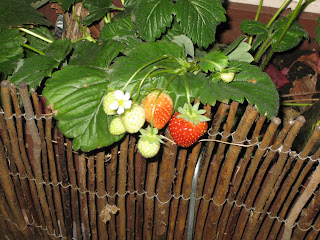 Indian summer strawberries, October 6th, 2011
A mid-summer, birthday treat
When I was little we always had our first strawberries of the year on mid-summer day, it was a special birthday treat for my Mum, my sister and me. It was not until a few weeks later ,when the local fruit came into the shops, that the prices dropped and strawberries became cheap enough for us to have more regularly though out the season.
Cheeky monkey
Early this year I had a blackbird visit me on my balcony. He turned up about the time that the frozen soil in the window-boxes thawed out and he began pecking around looking for grubs. He pecked away with such enthusiasm that he threw all the leaf mould out on to the terrace below that belongs to my neighbours.
So as not to cause a disagreement between the neighbours and my blackbird, I thought that I should fill the window boxes with plants to reduce access to the soil. I had a few trips planned for the next few months, going away for work and to visit my Dad, so I did not want to spend a lot of money on plants that would perish if not watered. It was also early in the year with the risk of frosts still in the air.
Picking up a bargain
While still undecided as how to solve the enthusiastic-blackbird-problem I noticed in the local supermarket a packet of six strawberry plants for ninety-nine cents. Now what was that if not a bargain? If I planted them I thought, at that price I would not have to worry too much if the plants did not survive my long absences or get caught in a late frost.

With six plants planted and a blackbird with his bill put out of joint, the neighbours and I were happy.
Strawberry picking
I returned in mid-June from one of my trips to England to find a handful of strawberries ready to be consumed on mid-summer day.
I did not get many more than that handful because the leaves on the tree that give me the much-enjoyed shade on my balcony prevented much growing during the summer months.
I spent another four weeks in England in September and returned to find that my strawberry plants had decided to offer me another handful of strawberries.

I discovered there to be flowers and small strawberries on several of the plants, those that had received the most twinklings of sunshine through the leaves of the purple leaf prunus tree, Prunus Cerasifera Nigra.

This second harvest has so far given me a strawberry a day for the past week! It is nice to get up, take my usual breath of fresh air on the balcony and pick one fruit to eat with my muesli or slice onto my toast!

It is October the seventh and there are still enough strawberries for another week, as long as the sun comes back.

I cycled home last week at seven or eight in the evening with the temperature still over twenty degrees Celcius. Except that is for yesterday, when it had suddenly dropped after an early morning shower to eight degrees! I have brought the miniature rose indoors and a few pine nut trees that have grown up from seeds from a discarded pine cone, there is a feeling of frost in the air.

I do hope that those remaining strawberries make it until they get a blush of colour on them and that I get to eat them before that blackbird catches on and returns for a cheeky breakfast.