Stars in your eyes 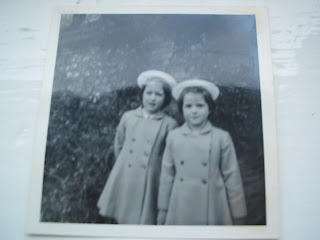 Sis and I, off to Sunday School, 1962
Always stars
I was at school with Little Princess last week when the teacher asked the class if they could guess why the television crew had asked whether they could come to film in the classroom.
There were so many different answers but not one child guessed, until the teacher fed the answer into their mouths.  The teacher explained that it was exactly for this reason that it is just taken for granted by them that they have a child with disability in the class, that the television wanted to make a film about them.
The film would be shown with the hope that it would educate others the teacher explained. The teacher said that how the children accept each other in their classroom is ideally how it should always be and not an exceptional situation and that this is what the television wanted to present.
Witnessing this dialogue between the teacher and the class brought tears to my eyes. Having found this class for our Little Princess three years ago really was a splendid thing.
I had tears not only in my eyes but rolling down my cheeks this evening when I watched the results of this filming project.
Fame for a day
Little Princess went home on Friday evening in a hurry. She wanted to be home to watch herself on the television.
Her last words to me as she left were to ask if I would be home to see it too.
“I have no television”, I answered.
“And the neighbours?” she asked.
She was really pleased with her performance at school that morning and wanted me to see the film about her and her school-day when it was aired that same evening.
I did not tell her that I would probably not be home until after nine o’clock and would probably miss the repeat showing too, but I promised that I would see the programme somehow, even if it was later, in a recording.
I was out all day yesterday and have just had a look in the archives of Franken television to find the super-star and there she is, smiling so early in the morning and still smiling after a hard day at school and even harder day under the spotlights. The classroom assistant, teacher and all the children were excellent in their supporting roles too.
Take a look here:
http://www.frankenfernsehen.tv/default.aspx?ID=4448&showNews=1058762
I have translated the text from the website and posted it here, below. I will post a PS later with a rough translation of the film script.
Behinderte und Nichtbehinderte Kinder lernen gemeinsam
Behinderte und nichtbehinderte Kinder können nicht gemeinsam lernen, so ein lang gehegter Irrglaube in deutschen Klassenzimmern. Vor etwa zehn Jahren starteten die ersten Modellprojekte um das Gegenteil zu beweisen.
Seit diesem Schuljahr gibt es in Bayern 41 Schulen, die sowohl von nichtbehinderten als auch von behinderten Kindern besucht werden. Es handelt sich um sogenannte Inklusions-Schulen. Dass das bestens funktionieren kann, zeigt das Beispiel der kleinen Felicia.
Disabled and non- disabled learn together
Disabled and non-disabled children cannot learn together, or so goes the long fostered misconception in German classrooms. Ten years ago we saw the beginning of the first pilot scheme to prove the opposite.
From the beginning of this school year there are now forty-one Bavarian schools that are attended by both disabled and non-disabled children. These are the so-called Inclusion-schools. An example of how well this system can work is shown here by Felicia.
Posted by Susie Mallett at 22:08

Lovely video, Susie. I wish I would have kept up on my German!

I have roughly translated it and will post the translation later today.

I just could not wait to put the film up until I was ready with the translation. Sorry.

Yes, the film is nice, it is no wonder that Littlie was so happy on Friday afternoon.