Name that Dino in one... two, three, four, five 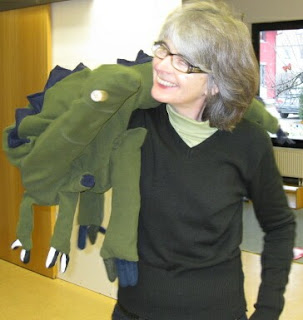 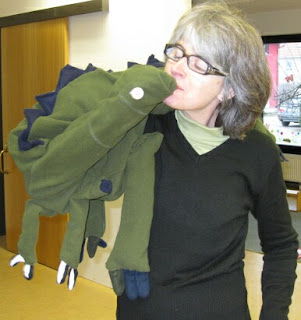 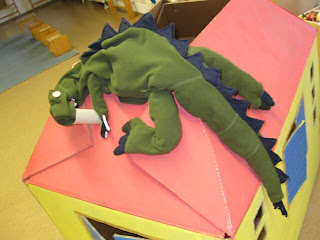 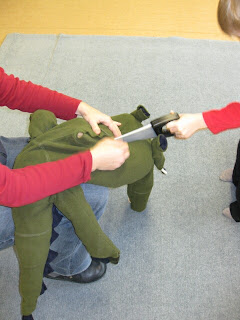 Dino at work! 27th November 2008, Nürnberg
A dino with no name
This morning after franticly looking for safety pins, with which to attach the dino’s legs, and some tape to stick his eyes on with, I rushed off with him under one arm to catch the tram to work.

Everyone loved him even in his unfinished state and he was put into immediate use as motivation for the whole morning...
This "Dinosaur with no name" unfortunately ate Lars, a toy horse, long before anyone was at the plinth. When the children arrived the dino was burping away like mad and they asked him what he had eaten for his breakfast.
Dino, still without a name, told us he had been so hungry that he had eaten a horse and now his tummy was hurting. Its hooves could be seen pounding his tummy from inside (or so the children said).
One little boy went off to fetch a saw from the Spielecke (play corner) and with a bit of help from his friends opened up the dino’s tummy to reveal, just as suspected, a horse.
Dino was left to rest after this huge operation and Lars took over the motivation with his mate Bruno the bear.

Later the children had five minutes to play, while we conductors partook in our favourite activities of moving plinths and clearing away potties, and they immediately pounced on the sleeping dino. They operated on him further, removing all of his four legs and the rest of his stuffing! They even performed a complicated operation to remove his eyes.

I am just about to spend another hour putting him back together again, but this time all parts will be removable on a permanent basis. The children just loved operating on him so I will have to hunt around for press studs and Velcro in my arty-crafty boxes, so the fun and games of this morning can be repeated often.

I managed a few shots before he got dismantled, as you can see above.
Help needed!

One problem that I still have is that the children couldn’t decide on a name. One young lad actually said that it wasn't the job of children to name dinosaurs! So, as the dino remains "Dino with no name" any suggestions will be gratefully received, as soon as possible please because he will need a passport before travelling at the weekend! If the names come in soon enough, you can all take a vote and decide on the best one!

The only thing that I have come up with so far is Dinafour (DinA4), as opposed to Canine (K9)
Not in my opinion a suitable name for a dinosaur but he may get stuck with it if nothing better turns up...

Din A4 –paper size
http://en.wikipedia.org/wiki/Paper_size
Posted by Susie Mallett at 15:59

(S)he looks wonderful, I'm very impressed with your handicraft expertise! I remember a children's story called Stig of the Dump about a little boy who finds a prehistoric animal near the local dump/quarry who he befriends, and your dinosaur looks very like a stegosaurus, so perhaps he could be Stig or Steg?!

Well spotted, Gill, it looks a bit of stegosaurus to me too, in which case Steg does seem an obvious name to bear during its working life in Norway, especially as Steg or Stig are already personal names in Scandinavia.

Nul point for your memory, though! It was no dinosaur that the little boy found in the dump, but a cave man.

I know this only because spent the academic year 1963-4 in servitude, teaching a third-year class of 10-year-olds in George Dixon Junior School on City Road in Birmingham.

I was a dire and reluctant teacher, and remember little of my barely pedagogic labours there, other than that I read the class the book in question. Stig of the Dump had just been published and was very successful. Certainly the kids on City Rd liked it.

You’ll doubtless want the reference: Stig of the dump, by Clive King, first published in 1963and still, I believe, in print, as a Puffin Modern Classic). Over the years it has spawned two television series and given its name to a pop group.

I didn’t much care for it!

Thanks for putting me right, Andrew. My only excuse is that it was a long time ago I read it and my head is 'full' of Conductive Education now!

I have never read the book but always loved the title. As Stig was found on a dump he was probably very smelly so unless it comes to a vote, which doesn't look likely with the time to take off fast running out, then the green dinosaur could be getting the name Stinky Stig from St Johannis. That will look pretty impressive in his passport.
(St Johannis is the district of Nürnberg where Dino was created).