Future Footsteps, Adelaide, are travelling north in the Australian summer! 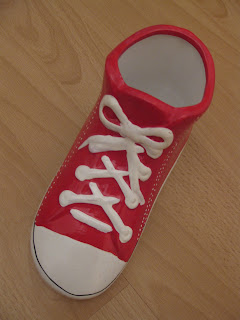 "A red-boot birthday present"
A few weeks ago I wrote about a new Facebook site that I had discovered. it had announced that CE was going to Darwin.
I asked on my blog if anyone knew anything about it:
http://www.susie-mallett.org/2011/09/beginnings-of-conductive-living-and.html
Esther Agocs did, and now you can read about it too, on the same Facebook page:
http://www.facebook.com/pages/Conductive-Education-Centre-Darwin/218948331499627?sk=wall&filter=12
You cana find Eszter Agocs at:
http://www.futurefootprintssa.com.au/index.cfm?fuseaction=browse&pageid=1&id=1189
Quite a lot has been happening for Future Footsteps since it opened last February. Well done, Eszter. I hope all goes well for you in the Crocodile Dundee country too.
Posted by Susie Mallett at 22:55