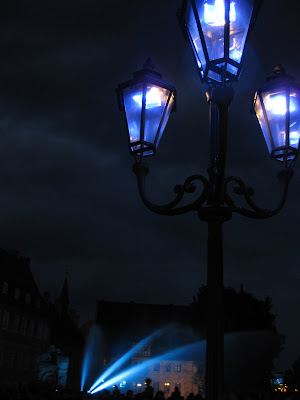 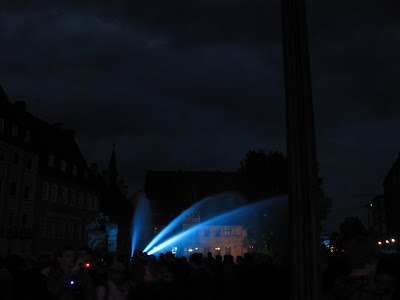 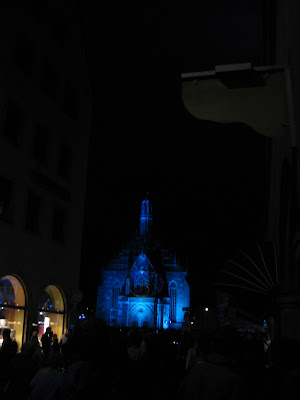 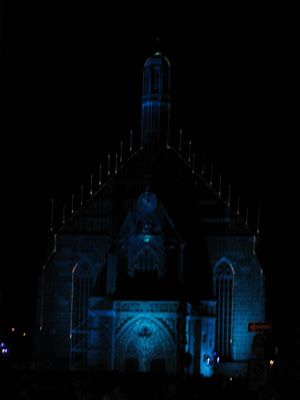 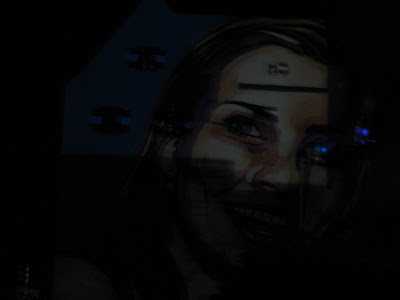 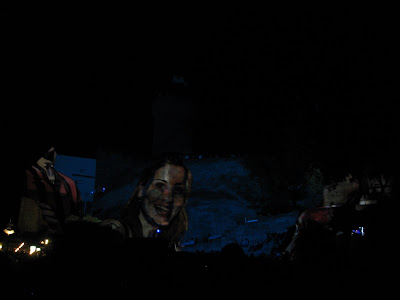 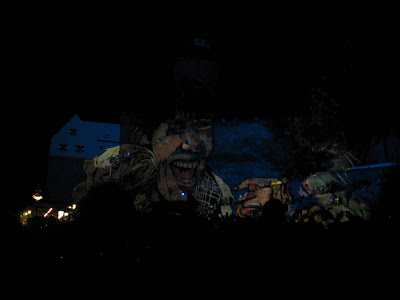 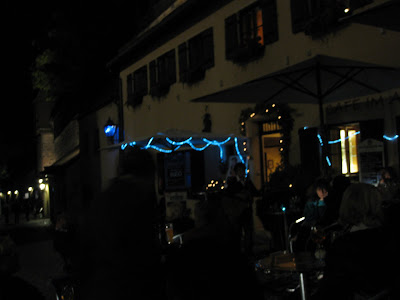 The night was blue

It was a warmer May evening than usual for Nürnberg’s night of culture, Die Blaue

As usual my hair was blue for the occasion and I wore my Blue Night scarf. That is a scarf that I painted myself with moon and stars on it that usually only comes out for this cultural occasion that is now in it twelfth year.

I am always surprised each year that I never see any other people in the 120,000 crowd who have altered their everyday appearance for the evening so that they include just a little bit of blue in there attire. Many people buy the blue “blinkies” on the night, small flashing lights for wearing on a lapel or on your glasses, but there is no sign of any dressing for the occasion! I think this would be different if this Blue Night were taking place in England, or perhaps I just hope that it would be.

Despite the lack of blue on the people there was enough blue to be seen in the city. Overnight all the light bulbs in the street lights inside the city walls had been swapped for blue ones, there were blue flood lights lighting up water-canons on the Pegnitz at Museum Bridge and somewhere at the top of a multi-storey car park there was a washing machine painting blue pictures.

There I was busy at my work, having completely forgotten the time, when at just after seven pm on Saturday a friend phoned and asked me where I was. In the next ten minutes I had put on some warm clothes, put blue dye in my hair and was off up the road to meet her.

I am really glad that I did.

We spent a very pleasant few hours together, watching a film projected on a screen of water in the main square and then saw bright, colourful paintings projected onto the walls of Nürnberg castle. Both events were quite spectacular. We took a break from our city walk in the Bratwürst Röslein with traditional Franken victuals to revive us: Weizen Bier, wheat beer, Dornfelder Franken wine and Obatzer and Breze, a mixture of different cheeses, cayenne pepper and onions eaten with a brezel.

After this break we continued with our midnight stroll but only as far as my favourite cafe where jazzy, poppy, rocky folksy music is often played. Here we met a friend of my friend and ended the evening with a coffee and an hour of music under the stars in a deep blue sky.
To top all of that the friend of the friend knew about Dr András Petö. Well, that is to say that she knew that he was a doctor from Hungary and knew a little about the work of conductors. How did she know? She explained to me that her husband had been a salesman and toured the exhibition and trade fairs in Germany selling toys that were made especially for child with disabilities. That was during the eighties and early nineties, the time when Conductive Education was becoming popular in Germany, especially in Bavaria, amongst families with children with physical disabilities. It was through his work that this man had heard about Petö and Conductive Education and was interested enough to have discussed it with his wife.