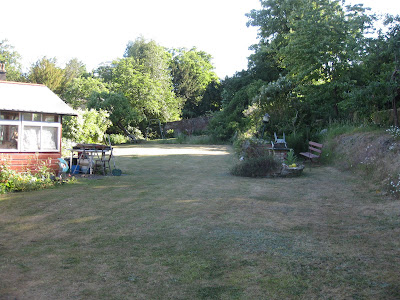 The lawn that does not look like Wimbledon, June 2nd, 2007
I have had a lovely sunny weekend gardening with my Dad, my Mum would be as happy with the results as Dad and I are. It looks a treat, except for the lawn that I spent a couple of hours cutting on Thursday evening. From a distance it could be mistaken for the Sahara Desert. I have never seen it quite such a sandy, yellow colour in early June before. Its dryness is of course not something that our gardening skills can influence, only water can do that. Last night we had a sprinkling of rain the first sign of water around these parts of Norfolk for weeks. The broad beans, shallots (to be harvested so Dad tells me on St John’s Day, 24th June), parsnips and young leeks plants are surviving surprisingly well but the runner beans, and the sweet peas that climb up amongst, them are longing for a wetter climate.
What seem to thrive best are the weeds, but I have attacked them from all sides for the past four days and have them under control, at least for a week or so. Hopefully my Dad will manage the small emerging replacements with a hoe until my next visit.
Tomorrow lunch time I will take the East Coast train to Newcastle-upon-Tyne, to attend a European Project meeting. The presentation that I have been asked to give is written, my suitcase almost packed. I am really looking forward to seeing a bit more of the north of England that I caught a glimpse of from the air and from the train as I flew over the country and then traveled southwards at the end of last week.
Having lived for twenty years outside of the UK I begin to realise how little of the rest of the country I have seen. I know the east of England where I was born and raised quite well, I know some parts of the south where I was a student and also lived for several years quite well too. But the rest of the country I have seen only from the window of a train or from a plane if I happened to be arriving home on a clear day.
It is time to change that and get to know my homeland a little bit more. I made a start a few weeks ago when I saw a bit of middle England and now I shall be venturing northwards Newcastle on Tuesday! I hear that there are angels in the north, well at least one Angel of the North that I will hope to spot from the train. Let’s hope my booked seat is on the right of the train I may also get a better view of the City of Durham as the train crosses the valley on a most spectacular viaduct.
I will have my camera at the ready this time, I do not wish to miss this amazing view, as I almost did on the downwards journey. A friend called me at exactly the right moment so I had time to stand up and look across the train and catch this incredibly impressive and oh-so-very-English sight. Of course my ex-railway man Dad was able to tell me about more things that I should look out for along the route. I especially enjoyed the stations at York and Newcastle-upon-Tyne that are built on curves. Most of my train travel in England has been via London so I am used to the terminal stations of Norwich, London Liverpool Street, King’s Cross, St. Pancras and Waterloo. The curvaceous Newcastle station will be photographed tomorrow!
Posted by Susie Mallett at 22:35