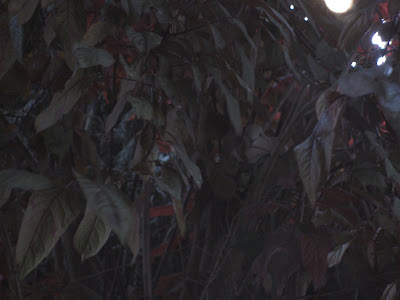 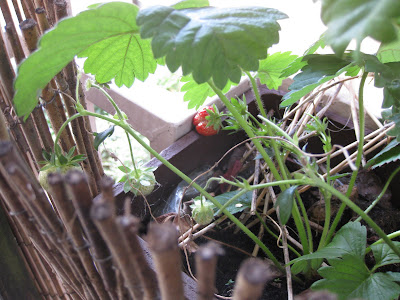 New flat-mates moved in when I was away, but because I have been so busy this week I have only just realized.

In the in-between-times at the weekends, for example, after posting something on my blog but before cleaning the kitchen, I pop out on the balcony taking a cup of coffee with me. Then again after cleaning the floor and before making lunch I go out again and pick myself a strawberry.

During the week I go outside first-thing to check out the weather so I can decide on what cycling gear I need and to drink my first cup of tea of the day. I go out again as soon as I get home just to check on the neighbourhood and to let some fresh air into the flat. Sometimes when the weather is warmer I sit in my deck chair for a few minutes before I go to bed.

This week I heard a bit of fluttering in the tree that has grown so much that it now drapes over my chair, but I did not spot the owner of the fluttering wings. I assumed that it was the cheeky blackbird that pecks out the soil from the window boxes in the spring before I fill them with geraniums and strawberry plants. I thought that he had pooped by for a strawberry!

When I went out into the grey damp air of this morning I came face to face with a collared dove that was carrying a specially chosen twig in its mouth. I looked with amazement when right in front of my eyes this bird presented this twig to its mate who was snuggled down on a nest in the prunus tree, the tree that provides shade and privacy for me on my balcony.

I grabbed my camera but the twig-bringer flew away before I could capture it, the mate stayed as-snug-as-a-bug-in-a-rug on the nest, as you can just see from the photograph above taken through the kitchen door.

I have not been out again since as I did not want to disturb them again. It is still cold and damp so I have not minded spending my bits-in-between times at the kitchen table bird-watching instead of being outside in the fresh air.

So now we are a family of three sharing the flat and as I do not know how long the others have been living here I have no idea how long it will be before our numbers increase and the twitter of tiny beaks will be heard from my kitchen table! As incubation lasts just over two weeks we could be five by the end of June! Assuming they have the norm of two eggs in their nest.

It is really nice having visitors, having someone to chat to out on the balcony and I really do not mind a bit if they decide to have a nibble of the few strawberries that are left.