It is the tenth "Blaue Nacht" in Nürnberg 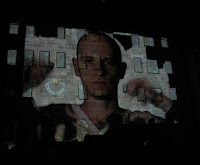 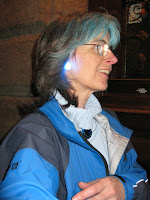 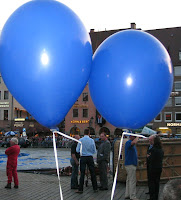 "Blue Images", by Susie Mallett,
May 2009
A cultural evening on the streets

The lamplights have blue bulbs in them, the castle is floodlit in blue. Flashing blue brooches are worn on lapels, in glass frames or as ear rings. Some crazy people like me have blue hair and others wear bright-blue wigs. Hundreds of thousands of people descend on Nürnberg for the tenth Blue Night!

The museums are open until late into the night, the cinema has special shows and the art museums special performances. Church towers can be climbed to view the spectacle from above.
There are events such as hot-air balloons floating over the main market square, films projected on the oldest of buildings in the city, and arty installations of all sorts. There is free live music to be heard and of course bratwurst and beer to be consumed. After eight p.m. there was not a seat to be found anywhere to enjoy a quiet glass of wine, soak up the atmosphere and people-watch.

It is Saturday, 9.30pm as I write. I have already taken a walk up the road once. I love it, I only have a five-minutes walk until I reach the “blue” flood-lit castle. I was there long before many of the expected 300,000 visitors had even thought about leaving home, before the blue lights were lit, when it was still light enough to recognise people in the streets. I then walked home in the dark having seen the first of the Blue Night light effects.

I will take another look later when the hot-air balloons take off and maybe, just maybe, I will get a seat in my favourite café, so that I can drink that glass of wine before walking home once more from what is probably the highlight of Nürnberg’s summer calendar. It is the first of many musical and cultural weekends in and around the city between now and September.

How lucky I am to now live right in the middle of it all.

It is now Sunday and the Blue Night is over, my hair has taken on its natural shade again, the streets of Nürnberg are relatively empty and once more spotlessly clean.

On my second visit to the Blue Night yesterday evening I still couldn’t find an empty seat so I wandered the streets for an hour or so and soaked up the atmosphere that way instead. I watched a couple of the arty events then made my way home.

The most impressive event was the projection of a film on to one of Nurnberg’s old buildings. It was actually very good and hours of technical and artistic expertise had obviously gone into its creation.
Windows of the actual building had been covered in white cloth and these very window frames and brick work were actually featured in the film, all projected almost exactly to the centimetre on to the original wall, with all sorts of coming and goings taken place in front of and behind them.

There were some very spectacular moments which I tried to capture with my camera as you can see above.

The Blue Night has changed since its first conception ten years ago. I still remember, from the year 2000, the huge stilt-walkers in their amazing magical, floating costumes and the man who told the story of the colour blue on an enormous see-through canvas. He stood behind it and climbed up and down ladders, and he painted and narrated. We, the audience, sat in front with mouths open in wonder at his beautiful painting as his story of a blue dot of paint developed.

Each year there are new creative events to watch and the usual museums to visit, but the masses of people make it virtually impossible to get near many of them. Even so it is an evening not to be missed and I expect that the plans for Blue Night number eleven are already on the table in the Rathaus (town hall).