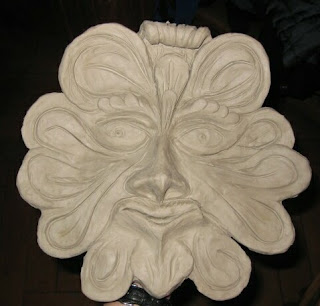 A green, but not yet green, "Green Man" by Susie Mallett, 7th January 2009
Part I. Problems with words

I been mulling over this subject for a long time now and the simple posting that I had wanted to write just isn’t getting finished, but getting longer and longer and beginning to cover a wider area than I had first visualised. So I have decided to do it Hollywoodsty-le, which seems to be quite the trend these days, and do a bit of sequelling.

One of the things I had been wondering about while working in Norway, and since, is how the term “Conductive Education” ever got established in the first place.

At the time in the 1980s when the world was getting to know about the Petö Institute and its work, the term "Conductive Education" was already well established but only used outside of Hungary. This is true to this day.

You will find the term Conductive Education used in English translations, English presentations and in the English version of the Petö Institute’s own Website, but in Hungarian practice and theory as far as I know it is always referred to as konduktiv nevelés (“conductive upbringing”).

So from this I can probably assume that my belief that “Conductive Education “ was being used in England at the end of the 1960s by Ester Cotton and her small band of associates is correct.

But who actually coined it and why?

I do have one more bit of information on the early usage of the English term “Conductive Education” Certainly when Dr. Mária Hári first went to England in 1968 she and her translator both adopted the expression.

Dr Hári read two papers at a study day at Castle Priory College in England in 1968 and in both of these there is absolutely no reference to conductive upbringing but constant use of the terms Conductive Education and conductive pedagogy.

It is stated in the introductory pages of the book that contains these papers, “Mária Hári on Conductive Pedagogy”, that the interpreter who accompanied Dr Hári chose to use Conductive Education to translate konduktív nevelés. Or did he/she choose? Did the translator just adopt a term already in use (Cotton, 1967), or was it a term suggested by Dr Hári herself?

Lots of questions and musings, all of which arose while I was working in Norway. Why is it important to state that it was in Norway that many of my questions where formed? It is because there the term Conductive Education isn’t used, they say “conductive pedagogy”.

I begin to think about the many different forms that Conductive Education has taken on as it is practised around the world. I wonder about the similarities and the differences between what Ester Cotton saw and described in the mid-1960’s, what many Western parents first saw and decided to bring out of Hungary in the mid-1980’s and what I experienced and learnt between 1989 and 1993.

I also got to thinking about the words that all these people used to describe what is being practised, and how these words might influence the acceptance or rejection of this “new” method.

The conductors I worked with in Norway were very much interested in the actual words used in the conductive programmes, which is understandable as they have three languages to deal with while working. I on the other hand was much more interested in what terms were chosen in translation to present the work to the public. This has had a huge influence on my work here in Germany, especially on its financing. We should not underestimate the importance of the choices that we make about this, as the terms could be around for forty years, and other people may have to live with the consequences.

Back to Gill (another angel), hopefully not for the last word
Perhaps Gill will come up with more answers. Maybe we shall never get to the bottom of it.

As she says on her blog it would be an interesting research project for someone with lots of time!

Gill (another angel) - refers to several of my blog postings in December 2008, for example http://konduktorin.blogspot.com/2008/12/susie-and-lill-in-hamar.html
Posted by Susie Mallett at 21:58