My very own Golden Globe 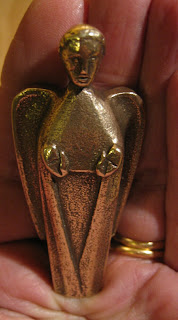 Today I received my very own “Golden Globe” award and I too made a gushing acceptance speech, but I actually managed to string my words together a bit better than Kate did and I also remembered the names of my friends!

These friends are two conductive souls whom I have known since 1992. They are not only conductive souls, these are your everyday real-life souls, people who care and understand.

My own Golden Globe is three inches tall. It is getting more and more golden as it sits in my hand and develops its own patina from my touch. Most importantly, it is formed in the shape of an angel!

Yes I am the one who calls my conductor colleagues my angels, writes about Dr András Petö and his angels and has a few other friends whom I consider to be my angels, and I have actually received my own angel! I was thrilled and what luck that I didn’t have to trip up the stairs in a long dress and embarrass myself with a daft speech to receive it. I accepted it graciously with a huge smile and a warm soul.

My Golden Angel came in a lovely silky black bag with the word "pilgrim" printed all around the top. This is quite apt as one definition of the word pilgrim is “one who journeys in foreign lands", something that I have the tendency to do!

This small bronze angel was created by the sculptor Christoph Fischbach and produced in the workshops of the Benedictine Abbey of Maria Laach. It came with a small booklet telling me that angels were in themselves never something to believe in but messengers, the bringers of tidings from somewhere/someone else., implying to me that this angels is sent to rest a hand on my shoulder and watch out that I do not stumble on my foreign journeys.

The friends who presented me with my mini-award I have known since 1992. I first met them in Budapest when they were living there while their daughter attended the Petö Institute. The support that they gave me in my final weeks while I was taking exams was invaluable. It really did feel as if I had my own personal angels bringing me messages from a higher level, encouraging me and showing me that I could do it! Which of course I could and I did.

András Petö I think was right when he said that in each of us is an angel (see blog references below) and I believe that we find many ways to dispatch these angels as our own messengers. I am very happy, as over the moon as Kate was with her two Golden Globes, to have my very own angel in my pocket, not dispatched to me surrounded by the glitter of hollywood stars, but in my own cosy kitchen and by two valued friends.

Patina -
A surface appearance of something grown beautiful, especially with age or use
http://www.merriam-webster.com/dictionary/patina

Two bits from András Petö on angels
"If an illness comes into the realms of God’s influence, the Ens Dei of Paracelus, we enter the area of mercy, grace and favour and of healing through belief and prayer. The saints of the holy sites of pilgrimage, such as Lourdes, belong to this category as do theologists who believe in and speak about the work of the angels, together with that of the saints, in their sermons. Many people pray for the healing properties of these angels and saints."
Karl Otto Bärnklau, Unfug der Krankheit – Triumph der Heilkunst Verlag, Karl Schustek, Hanau/Main, 1965

"There is always a voice saying to do this and to do that and you must not close your mind to the idea that an angel is speaking from within you”.
Reportedly said in a conversation between Peter Popper and András Petö
Posted by Susie Mallett at 10:25