Those "in between” hair days! 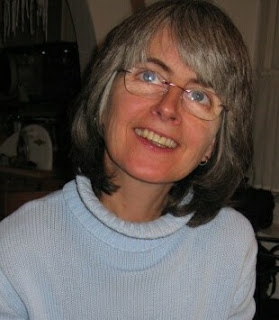 I am growing my hair and it has just got past the "in-between" stage.

I managed the "in-between” hair stage quite well.
Firstly for the first time in my life, because I went regularly to the hair-dressers, which is a bit of a contradiction but it worked!
And secondly because over the past six months I have not had much work where I have to crawl on the floor after small children. Working on the floor is not easy with in-between hair as it hangs in the face and simply gets in the way.

In my experience most conductors either have very long hair that they can tie back or arrange in interesting styles, or it is short, often very short, just as mine has been for most of the time that I have been a conductor. Up until now I have spent most of my time in the conductor brigade with short hair. I rarely went to the hairdresser, there was usually an arty friend or a fellow conductor who was willing to have a chop at it and save me time and money.
I expect that many conductors would say that they keep their hair short because it is so much easier that way, it takes less time to wash and dry and care for it. I would have said the same six months ago but now I really enjoy the extra minutes relaxing in front of the mirror while I dry my hair. I am lucky that my hair is very thick, so it gives me quite a few extra minutes of relaxation.

I love my longer thick hair especially in the minus temperatures which are still hanging on here in Germany. When I am on my bike (which has not been as often as it should be during this very cold spell) my new hair has the feel of an extra scarf around my neck.
I am also enjoying my new hair because it frames my skinny face, making it look more rounded, and that in turn makes me look more like the yellow “smiley face", all of which I am sure has a positive influence on my work!

That is so funny. When i studied in england i used to cut the hair of some of the students. :) I think I did a pretty good job! ;)

Maybe next time someone asks you to cut their hair you could say " did you ever think about growing it?".

I recommend it, even getting through the in-between times. It is definately worth the waiting.