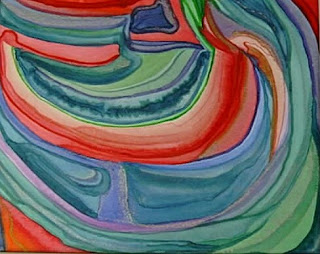 While travelling home from the Tina Turner concert I had difficulties pulling my suitcase. I had so many aches and pains in my arms, and my shoulders where really stiffening up.
I got to wondering whatever had I doing while rocking and rolling in Köln, had I really been dancing so wildly? Surely facilitating a young lad to rock at a concert is no more strenuous than doing the same while painting or cooking, Surely could not be the cause of the problem!

Nevertheless my arms were aching really badly especially the right upper arm.
Yes, my client had been sitting at my right-hand side, so I had used this arm to assist clapping and waving, and to prevent him from tumbling down over the crowds, but I could not believe this had caused such aching muscles. I ruled out the flu as I did not feel ill. So what could be the cause?

I suddenly remembered what my client and I, along with his three siblings and two cousins, had been doing together on Sunday morning. They had all been trying to teach me how to use Wii. My aching muscles were the result of just thirty minutes' testing out Wii.

Most of the stiffness was in my right arm, which meant that I had been most active when playing tennis and bowling, and that my left hook at boxing was probably not one of the strongest.

What have I learnt from becoming as stiff as a board?

First, that I have forgotten all my muscles over the cold spell that we have been having in Germany. I have been hibernating. With temperatures as low as minus 20 for two weeks and ice and snow on the roads for weeks the few times that I have ventured past the front door I have been taking buses and trams everywhere. I have not been keeping myself fit by using my bike to get around town as it is far too dangerous.

Secondly, I learnt that these games, available on Nintendo Wii, the sports and fitness programmes, certainly do bring muscles into action that have been sleeping for quite a while.

Thirdly, I learnt that yes it is very important to assess clients and choose very carefully the appropriate Wii activity, so to avoid unnecessary discomfort after playing.

Now I have to find the sponsorship for the equipment. Watch this space.