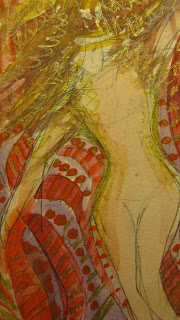 It is so interesting how similar themes pop up from different parts of the world within days of each other.

I know that my friend in New Zealand will immediately say "Susie, it is synchro-destiny working". I am not sure it is, I think it is something to do with what I am thinking about at a given moment, and I notice it, read it, listen to it and chew on it and churn it out again as something else. So maybe synchronicity would be a better word.

What ever it is, synchro-destiny or synchronicity, I have been hit in the face with similar, connecting subjects on several different occasions over the past two weeks, so it is probably time to stop chewing it over and write about it.

I have been thinking about the numbers of conductors who work alone, many directly after qualifying, and have been asking myself and others "How does the training prepare one for this unusual situation?" Does a conductor succeed or fail when working alone because of training or personality, or both? How much can initial training influence this?

Working alone is not so unusual these days but this was not how András Petö or even Dr Hári would have imagined us working, isolated from our colleagues. In their experience conductors worked in teams and perhaps we too should still strive to do this even if we are working alone.

I have been self-employed since I qualified from the Petö Institute fifteen years ago. This does not mean that I have always worked alone but I did for the first two years and I have done on and off ever since. I know what it is like, I know the positive and the negative sides of it. There was often no one to turn to so I had to dig deep into my own resources. But even if I was able to solve the problems that I faced there was still not always someone there to spark ideas off, to inspire me, to laugh and joke with, to offer me moral support or take over when the going got tough. I appreciate all this so much in the times that I work in groups with other "soulful" (seelische) conductors.

I was in Norway before Christmas working with two young, NICE-trained conductors They only rarely take over responsibility for their own groups, as there is nearly always a senior conductor working with them, but they are both very capable of working independently. They are keen to have a go and find out for themselves and, despite working with others they often feel quite isolated because of the ever-changing team and the many languages used. I have already mentioned in my blog that I have worked with a German NICE-trained conductor, and I saw similar qualities in her. All of them are extremely good at asking questions and searching for answers. I suspect that this has as much to do with the training they received as it has with their personalities. This former German colleague now also works in isolation but we work in a team through telephone and the Internet and we are planning to bring two of our individual session participants together in the Easter holidays!

Training at the Petö Institute

I talked to a Hungarian colleague here in Germany about these experiences with NICE- trained students. We began discussing the differences between their training and the training in Budapest that we had both been through, at much the same time, but in different situations.

I had been 32 years of age, a teacher and an art therapist, with a few years experience behind me, when I started my training at the Petö Institute. My colleague had been 18 and straight from school.

After four years’ training I moved to Germany and began to work individually with children and their families, in their homes. There was regular input for and from parents and siblings, sometimes even an older brother or sister acting as assistant conductor for a few hours in the school holidays! My Hungarian colleague had done much the same as I did following her training, she travelled abroad and she worked with families.

She says that still feels a sense of guilt at not had not having involved parents enough in the work that she was doing with their children. She said that she had been too young and too inexperienced to do this with confidence. She said that the training at the Petö Institute trained one to rely on a team but it did not encourage independent thinking and working.

She is absolutely right but, because of the work that I had done and the experience that I had had before I went through the conductor-training, this did not influence me quite as it had her. Once out on my own as a conductor I was glad to be allowed to have the contact with parents again, which had been denied me in the Petö Institute. It had disturbed me a lot when a child ran out to tell her mum that she had tied her shoe laces for the first time ever and I was not allowed to show the mum how. (Thank goodness we had the bufé).

Thinking about what my colleague said I remembered how, as a trainee conductor in a group, it really did appear that it was the policy of the Petö Institute to train students to be reliant on conductors, conductors to be dependent on senior conductors and senior conductors dependent on group-leaders and so on. I even heard recently that it is still difficult to get conductors, who were training me twenty years ago, to give public presentations on their work.

I asked myself whether it could have been a conscious decision on the part of NICE to avoid this dependency and hierarchy, and to prepare the students for working independently whether in a team or in isolation. To get them ready to go out and spread the word about their profession and to practise it professionally in all situations. Surely it was the wish of the Institute that these trainees would eventually either work in Birmingham or in satellite centres in UK and this has actually happened with some. Others are spread in all corners of the world working alone or in pairs and from what I hear they are doing very well. They have learnt not to be dependent on colleagues, to use their initiative and get on with it. There are of course many conductors who trained at the Petö Institute who are doing just the same but, as my colleague explained to me, they learnt the hard way, and alone.

Let’s not be alone

Many conductors work in big centres throughout the world but many of us, through choice, or personal and family commitments, choose to practise as conductors in isolation. I am sure many of us who are "going it" alone would like to communicate with other conductors from time to time.

Surely it is time to join forces and became one of the biggest conductive communities in the world.

Bufé – the best place at the Petö Institute for eating scambled-egg sandwiches, maize salad and turó rúdis. A good place for talking to parents, participants and colleagues. It was always swarming with activity, buzzing like bees around a honey pot. From the bufé we could hear the singing from the floors above and see the children walking down the stairs to the garden. We could see whether the lecturer had arrived or whether we had time for another coffee. We could take part in the conversations with parents, which we missed within our groups, we could meet and chat with Hungarian colleagues as we came and left work. It was here that two German mums offered me their much-welcomed support as I came and went from my final exams in 1993.
Posted by Susie Mallett at 18:57