We were forced to take the slow-boat from China! 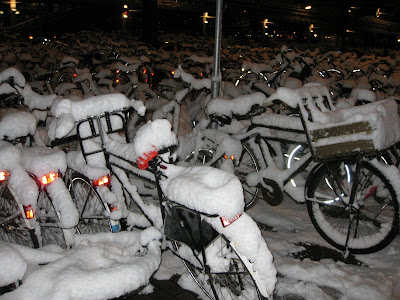 Where else but Amsterdam? 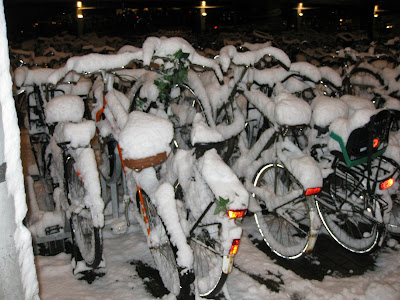 There were still people riding bikes despite the snow 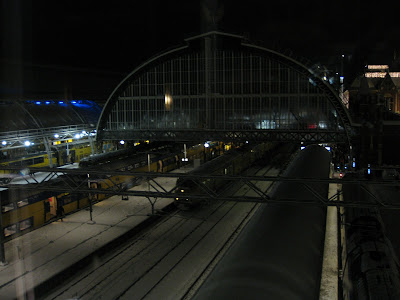 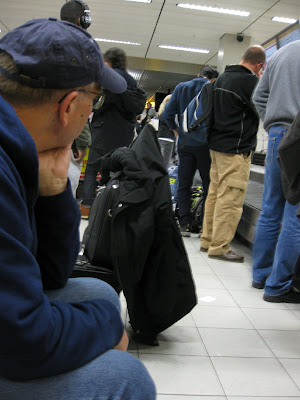 Waiting for luggage that never arrived 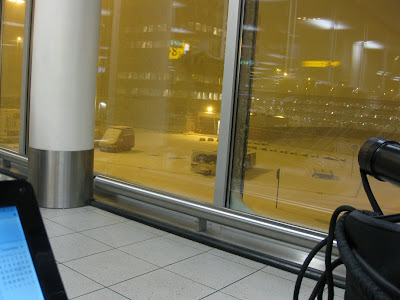 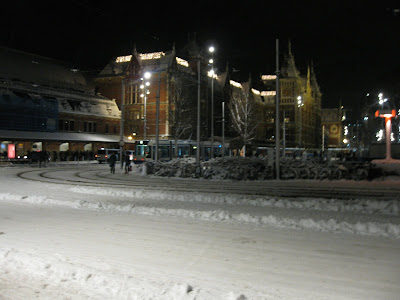 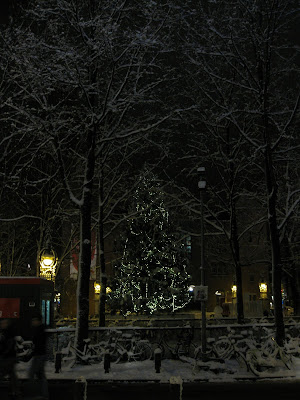 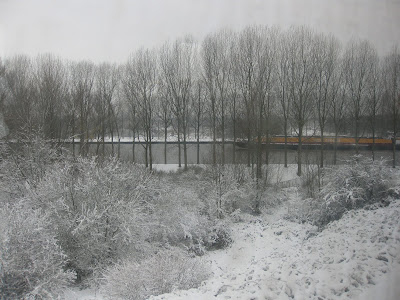 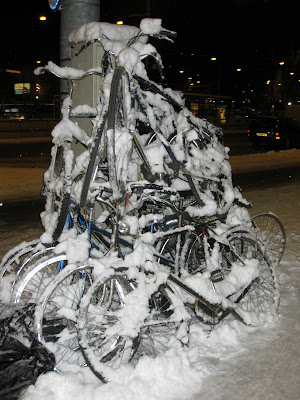 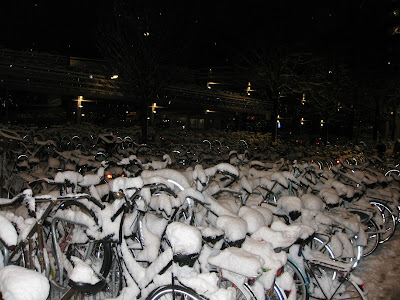 And it seems to have been, just the right thing to do.

I slept a bit in a cramped seat on the twelve-hour flight from Hong Kong and dozed a bit on a lovely reclining lounger at the airport in Amsterdam for what we thought were the five hours between flights, but I still felt tired.

First there was the wait for take off, then after the flight cancellation there was the sitting on a trolley waiting for the luggage. Then after four hours and no luggage came the long wait for the trains that never came.

Following a decision not to even try to travel in minus ten degrees during the night, even if there were eventually trains, I had a long deep sleep in a very comfortable bed in a hotel over the railway lines. I found it incredibly exciting to be staying in a hotel over the train station in Amsterdam, a building that looks like a castle from a Disney film.

The slow "boat" from China continued into the third day with a long comfortable train journey on an ICE train through Germany in brilliant sunshine. Comfortable as I found a spare seat all the way despite the crowds.

For the last leg of the journey from Dusseldorf to Nürnberg I sat beside an airline pilot who told me the ins and outs of bad weather from the other side. He also assured me that my luggage would find me. Which it did a few hours ago and it is all unpacked, treasures and art works surrounding me as I write.

I have heard from some fellow Hong Kong travellers that they felt very tired when they returned home. Suffering from east-west jet lag and flu like symptoms. Despite the getting on for three-day journey I feel fine. I think that we, the Bavarians, the Hungarian and I, really have experienced the advantages of travelling slowly.

A slow-boat journey, giving time to aclimatise really does have its advantages over high speed travel.

We did not take a boat but it really was a great adventure to travel on so many trains and to sleep above the double-deckers that were stranded in Amsterdam Central Station.

Not only did I travel by train on the last legs home, I also met a couple of model railway buffs. The first one I met while waiting to hear whether the flight was taking off or not, and he described to me the boxes of pre-war rolling stock and all the extras that he had innherited from his grandfather, all in N-guage. The second was the airline pilot who is building a G-guage layout in the cellar with his two young sons. With Christmas coming up and two weeks holiday for most of us it was going to be a time for these two families to "play" trains. perhaps i will get my N-guage station built too.

Work starts again tomorrow, and continues all week until Christmas Eve. My weekend has disappeared. It was supposed to be a Christmas-preparation-weekend, it was why I booked my ticket home for Friday, so I would have time for some preparations.

I had planned to walk up the road to purchase a Christmas tree on Friday morning, make Christmas sweets on Saturday after collecting all my parcels from the post office and for today, the last advent Sunday, I had planned to decorate my tree and complete the Christmas cards.

With none of this yet done we will see see how the week progresses and if Christmas gets cancelled like the plane or just put on a slow-boat, arriving sooner or later just like I did.

After a house visit tomorrow morning and the collection of my post and packages from the post office, I will be wrapping up warm and taking off to the city to sell stars for charity at Nürnberg's Christmas market.
Posted by Susie Mallett at 18:46

Labels: Christmas, Making the most of things