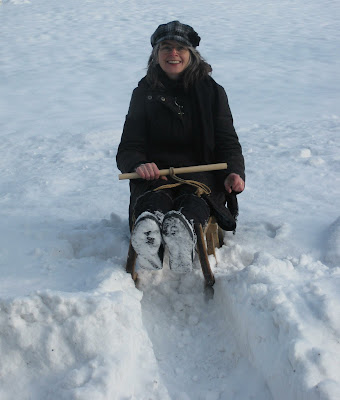 Off to Hong Kong by sledge

Before the four, three, two, one - takeoff!

Not quite ready yet, but the count-down has definately started.

I am not really travelling by sledge, as indicated in the photographs, although on second thoughts it could be the best way to get to the airport!

I have decided on the tram and underground so as not to get stuck in a traffic jam in the city and also so I could notch up as many means of transport that I can in twenty-four hours. Starting with number one: the sledge!

We really do have an awful lot of snow even here in the city, but the airport is still open.

I am looking forward to the warmth in Hong Kong, not only from the weather but also from the friends, new and old, who I look forward to meeting very soon. Including the friend who took me on my first sledge ride in 1989.

I wish everyone a safe journey.

See you all soon!
Posted by Susie Mallett at 20:54