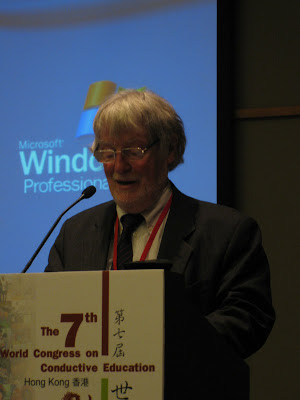 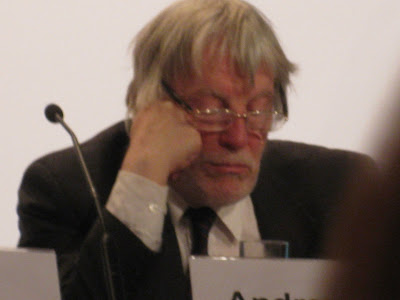 Now I am not sure which one is the medve.
Over on Andrew Sutton's blog he mentions that Franz Schaffhauser described him as a tengeri medve:

http://www.conductive-world.info/2010/12/te-jo-oreg-tengeri-medve.html
With Andrew's permission above are two pictures of that medve.One taken during the plenary presentation and the other during the podium discussion.

I must point out that in the pictures that I have of the twelve people who took part in the last two podium discussions not one of them looks any happier than Andrew does. Perhaps they were all despairing about the future of the conductive world, maybe they were just deep in thought.

Unfortunately I do not have permission from any of the other speakers to publish their pictures here.
Posted by Susie Mallett at 21:52

Perhaps I should add that the top photo was taken on Day 1 of the Congress, the lower one at its close on Day 2.

PS You wrote: 'Unfortunately I do not have permission from any of the other speakers to publish their pictures here.'

Actually, this is photo-reportage... and they are all adults.

You do not need their permission.

As of course you did not need mine.