Thank you presents before lift-off 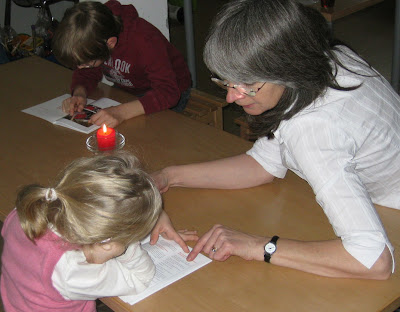 On Wednesday I did a lot of the things that I could have left until Thursday or Friday but decided to get them out of the way in case something else came up before lift-off. It is a good thing I did as it was a lot more snow that came up! Well actually it came down, all day and all night for two days leaving us living in fairy land as it stuck to the trees too.
I had two very important things to do apart from buying shoes, T-shirts, getting hair done and other last minute jobs, like emptying the dustbins and lugging my bike into the cellar.
The first important job was to get Évi‘s birthday present in the right place so she could open it on the day. I actually left it on a shelf at work and she spent the next two days fiddling with it, but with faithful promises not to peek inside.
I am not sure why I decided to take presents to the school children on Wednesday, but I made the right decision. Snow stopped play for the rest of the week, with parents deciding to fetch their children home directly from school to save them from sitting in the traffic for hours on end during the rush hour, and of course giving them time to play in the snow at home!
On Wednesday I was told by my Jolly Professor that there were no snowmen in his garden and later when I looked elsewhere in town there really were no snowmen anywhere.
The railways in Britain would like this one:
Jolly Prof. informed me that the reason for the absence of snowmen and no snowball fights taking place is because despite there being feet of it lying around all over it is in fact the wrong kind of snow!
He is right and I had not realized. It was the right sort to cause the journey home from work to take two hours instead of thirty minutes but as it is very dry and powdery it is not suitable for rolling into big balls for snowmen body parts. So the sledges came out instead and still lots of fun were had by all.
Back to the second important job
My littlies who feature lots in my blog also feature a lot in my newly published book. I had decided that although the book is not officially launched yet, I am waiting until I put up my poster show in Hong Kong, to give a selected few a copy, (my Dad; sister, who proof read; Godmother and my co-designer Uli).
I also gave the Littlies a copy and luckily I did it on Wednesday before the snow disrupted our routine. I have not seen them since!
The photographs above were taken by Évi who grabbed my camera and spontaneously snipped away.
I was near to tears as they opened their books and in their first-school-year reading style read what I had written for each of them in the front.
Then they were all agog

They did not know that I had been writing a book, but suddenly they wanted to know all about it. I suggested the pages that they might like to turn to first to discover themselves in print. It brought tears to our eyes to watch them it looked like they were reading the English text. They were fascinated and they made my day. I have yet to hear reactions from their families but the looks on each of their faces was enough to satisfy me.
I had not realized that there comes this sort of anticlimax after working so long on a book. Every spare minute of every day spent correcting and designing extra pages and going for meetings and then off to the printers. Then the books arrived and a lull in the action. It was nice to start giving copies to people and to see reactions. The reactions of the littlies was a perfect start.
As I sit here at the airport with a couple of hours to spare I have received a text from my sister to tell me that my Dad received his book with a post delayed by the snow. He said he was in tears as he read about Little Princess.
I am so sorry that I cannot ring him to speak to him. But I will speak to him when I get back after the trip of a life-time.

PS
I am posting this from Hong Kong. I arrived on Saturday evening after only a slight dely in Amsterdam waiting in the queue for a de-icer.
I am much too busy promoting my book, meeting old friends, made in 1989, for the first time since I was in studying Budapest to have posted on Hong kong so far.
My first impressions?
Washing hanging out of high rise windows out over the pavements drying, the amazing trams and the green E.R. post boxes. Of course there are many more including those of the art workshop that I attended this afternoon and the banquet this evening.
Posted by Susie Mallett at 17:01