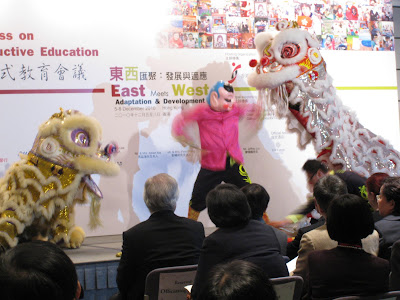 But did it?
I am not sure that it did
This Westerner, though, is certainly making as a good a job as she can in the short time available to connect with the East.
I have been to meet people at the SAHK headquarters today and tomorrow I have my last visit to a centre. I will go in the morning to the Marian Fang Centre to watch some children in their Kindergarten groups. This will be my first time observing “Hong Kong CE” with children.
But did East meet West at the congress?
The East, that is Hong Kong and SAHK, did a wonderful job welcoming us and helping us to feel at home. They began these preparations well before we landed, smoothing the way for months ahead.
So in this sense, yes we certainly met.
I wonder what others think. Did East meet West? Or the East meet the West? Did two parts come together? Did more than two parts come together. Did the conductive world move onwards in anyway?
I came here to learn about what is happening in the East. It is quite easy to follow through the Internet what is happening in most countries in the world. But it is at congresses like these that it should be possible for us to meet those that the world knows little about.
I tried to attend parallel sessions where there was a mixture of presentations from China, North and South America, Australia and Central and North European countries, but still I did not get the feeling that anyone was really meeting, East with West or North with South. Despite the big banners hanging all over the Conference Centre people, ideas or souls did not really meet on a scale that could have been possible.
The discussion time was too short, even shorter when the chairman of the session was not strict at time-keeping.
In the parallel sessions I heard about practice in centres or in whole countries as told by conductors or parents, but all as very separate units. Part of a whole? Yes, in that they were part of the Seventh World Congress, but not really part of a unified whole that could have been the world of conduction.
The Hungarian presentations all took place at one time in one symposium as did the Chinese presentations. So if we wished to listen to something else at this time we missed all things Magyar but not all things Chinese as there were a few others scattered throughout the programme, although these mainly from Hong Kong.
As I write I realise that the Hungarians were all in one symposium because there was simultaneous translation for this group and this was easier if it all took place in one session. I realise now, because we spoke to each other, that the Hungarian translator was here in Hong Kong. I know her well from my Budapest days. I gave her a copy of my book plus one for the PAI Library and discovered that she is my Budapest dot!
Perhaps we could say that East met West on the podium. In the plenary sessions there certainly was a good selection of countries represented. But again there was very little time for discussion and not an awful lot of meeting going on.
Again, it will be interesting to hear what others think.
What did I meet?
Chinese puzzles
I came to Hong Kong to find out what the Chinese, in particular the Hong Kongers, do in the field of conduction. I was interested to see how they do it without conductors and eager to find out as much as I could about the Chinese culture, to hopefully discover why the two, conduction and Chinese culture, appear to fit together so very well.
I came here also with many questions. I wondered whether the Chinese on the mainland will carry on without conductors, as they have done for many years in Hong Kong. I wondered too whether they will be looking for in-service training by conductors or if they are going to begin training their own conductors.
I wondered how the Hong Kongers will manage to export CE to Mainland China on the scale that it will be needed there. With or without conductors this is a daunting task.
In my discussion with SAHK staff today we agreed that the approach in China must almost certainly be through the families and parents learning how to live conductively and how to bring up their children conductively. We are looking at too many potential clients in China to be able to set up groups for them all outside their homes. This should not be the chosen way ahead for many other countries either.
So, after the Congress, I from the West did meet the East. I should have been very disappointed if this had not happened, as this is what I came for.
At the Congress what did I meet ?
At the pre-Congress workshop, where I understood not the spoken language (Cantonese with no translation) but the smiling faces, the artworks and activities used to create them, I learnt a lot and have been inspired, so my children in the west will be doing creative activities inspired by my colleagues in the east.
At the Congress itself I met lots of people. People who I have had contact with through my blog. I also met many more people from the past. There were so many conductors present from my Budapest days. It was a bit like a 1989-1993 reunion! Lots of hugs and happy reminiscing! It was very interesting to see such a huge proportion of this generation here in Hong Kong.
I think I have seen more of East meeting West pre- and post-Congress than during the Congress itself.
What about the others, what did they meet, and where and when and how?
Posted by Susie Mallett at 14:59

You certainly appear to have begun an individual meeting, enough I guess to see what a colossal task this might be. Did others? Well, an easy answer is to say that, if they do not communicate their experience then we shall never know. More subtly, if their future thoughts and actions show some obviously Chinese-infuenced change, then the twain have will have met – but again, if these are not communicated then we shall never know.

Previous performance within Conductive Education does not lead me to recommend breath-holding behaviour. Not anyway when it comes to the Western part of the equation. As for vice versa, then I suspect that the Easteners will have been searching Western contributions to the Congress very closely, for anything of potential use. I wonder whether they will have found any. I suspect that they will, as you suggest, carry on very happily without conductors. Whether they will be any the better or the worse for this is not at issue, just that they will carry on, very happily. We shall see.

Yes, you are right, the very tight scheduling was not conducive to communication, or meeting. But I suspect that the problem is more fundamental.

As a podium-member, I can only agree that the 'meeting' problems were apparent in that context too.

I am sure that you will need no encouragement to report back, with pictures, your clients'
new Chinoiserie. Again, I do hope that others will follow suite.

By the way, 'meetings'. The word,in English, does rather bring one back to Martin Buber. Or you could use the term 'encounters'. I cannot immediately lay hand on the original German word that AP would certainly have thought in terms of! Either way, whatever you call it, without the actual process occurring, then there will not be much in the way of advance or change.

Maybe, if there is another Congress and it occurs in Germany, the organisers will be sharply attuned to the possibilities of engineering this process as yet another way of trying to relate what they are doing to the original mainspring. Maybe.

As ever, thanks for a vivid and stimulating posting.