More fun in the summer 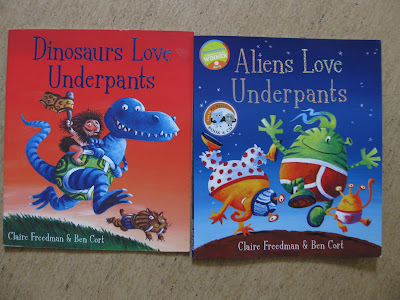 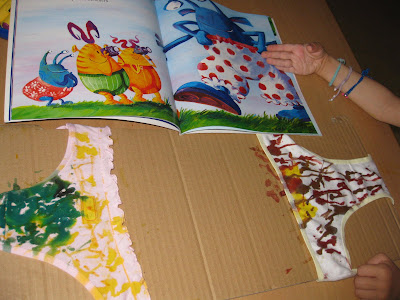 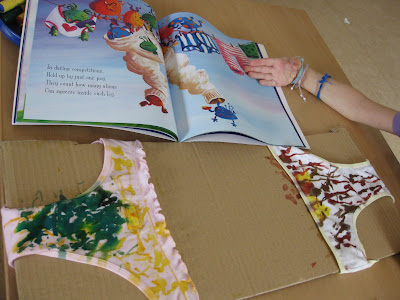 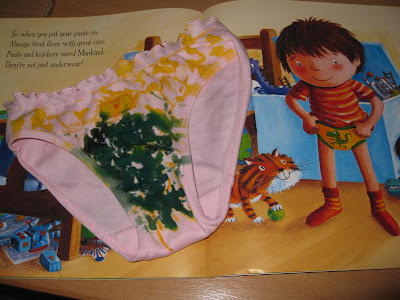 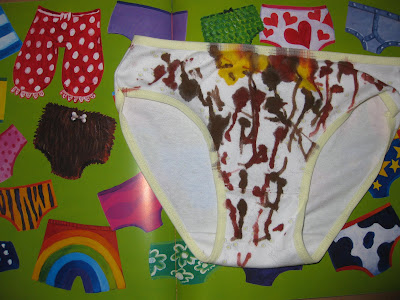 Dinosaurs and underpants
When I went to work in Norway a couple of years ago, for three whole weeks I entertained six ten-year olds with dinosaurs in every shape, size and form. Most exciting where the dinosaurs with underpants!
http://www.susie-mallett.org/2008/08/dinosaurs-love-underpants.html
The boys just loved it all, especially the brilliant book, Dinosaurs Love Underpants, that I had bought so spontaneously long before I knew to what use I would put it, as I took a short cut through a bookshop in Birmingham.
The book had remained on my shelf until I found a use. The shop, one of a chain, got crunched and disappeared, but the book has certainly earned its keep, entertaining little boys, and girls, many times since its first outing in Norway.
The aliens came to town
Last year on a trip to England I spotted a second book, and this time it is Aliens (who) Love Underpants!
I bought it imediatel,y attracted by the inviting cover and the gaudy and funny pictures inside. There is even a CD with this one, with the story read by Rik Mayall. Now, I love Rik Mayall, and it seems the children do too. Even if they cannot understand what he is saying they know he is funny.
I remember Rik from years ago in his guise as Kevin Turvey in the early 1980s. This was one of the few occasions in my adult life that I lived in a house with a television. The TV was not mine,it belonged to the owner of the house from whom I rented a room, a sound engineer with a mobile recording studio in one of those long, streamlined American caravans. He was always off somewhere recording al fresco and I got to watch his TV!
Rik Mayall, as Kevin Turvey, sat in an uncomfortable arm chair, leaning forwards to tell his stories into the camera, in much the same way that Ronnie Corbett used to.
Here he was again, some twenty-five years later, telling stories for us about aliens and underpants! He really does know how to pronounce quite ordinary words so that they make children, and adults, laugh. Even children who do not speak English.
I used both my alien and dinosaur books this summer when the littlies came for fun and games.
Princess Littlie loved the books more than anyone. The CD was played over and over again, with me sometimes translating and sometimes not.
As soon as Littlie arrived she would check out where, along her adventure-playground style course, the books were placed. She would take herself, through ladders and over plinths, over stepping stones and through tunnels until she reached the books. Then we would stand reading them for what seemed like ages until she had heard enough of my voice. Then the CD would come on. We carried on with our programme accompanied by the whizzes and whees of Rik Mayall’s brilliant story telling. All great noises, not only for adventures with aliens but for kicking balls, playing hoop-la, throwing bean-bags and shooting targets with rubber-bands!
Every day I read the wonderful rhymes in the books in English. Then I explained in German how dinosaurs came to be wiped out and how aliens came down to earth and played among the washing on the line. I read the warnings on the last page for all children to check their underwear for lurking aliens before dressing. This was always greeted by a knowing, yet not quite knowing look.
At the end of five days and five hundred readings my German translation was beginning to rhyme almost as nicely as the English.
Pants and paints
After the first day with the books I realized that the great white children’s underwear search was on. It proved virtually impossible in Norway and Germany to find small white pants! Littlie and I plumped for pink (of course) and pale yellow. They did the job as well as any.
Although Littlie had listened to and read the Alien book most of all, it was the pants from the dino-book that caught her attention and she reproduced two from that book on her own real-life pants. Her eyes nearly popped out of her head on the day that she saw not books awaiting her but pens and knickers!
I had a selection of my fabric pens for her to choose from and she decided that those with the harder tips that pushed into the pen to let the colour flow were the best for her. As usual she was right.
The hard nibs were perfect for her as they could withstand the pressure of her athetoid writing technique. Pressing hard on the fabric did not destroy the tip as it did on the normal felt pens but did allow the colour to flow.
This little girl always knows what is best and I praised her yet again for knowing this better than I ever do.
It is true that nine-times-out-of-ten she does know best and I make sure that I encourage her to tell me that she wants to do something differently to how I have planned it. She is learning that her teachers do not always know best and I hope that in the future she will have found her voice and the confidence to show everyone whom she meets in her ever-widening world what she needs.
After painting and blow drying the dinosaur-knickers, we ironed the colours to fix them and I expect Littlie was wearing them the following day as she set out on her farmyard holiday!
Notes
Rik Mayall -
http://en.wikipedia.org/wiki/Rik_Mayall
Aliens Love Underpants, by Claire Freedman -
http://books.simonandschuster.co.uk/tagged_assets/aliens_design_underpants_3698.pdf
Posted by Susie Mallett at 19:05