Just a snippet about going home and growing up 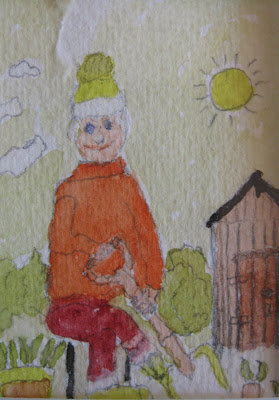 It is something rather special when the new remains exciting but at the same times gets absorbed into daily happenings and gradually becomes the “norm”. But still the rather special norm!

Life in the second school year is becoming easier for our afternoon Petö children. After a year of being transported here and there between school home and afternoon group we have at last streamlined the whole thing.

Classes now go on until 13.00 instead of 11.30, so we are missing out the middle man and the children are picked up after lessons and brought straight to me for lunch and a bit of fun!

The middle man has been a grandma or a granddad, or a mum or a dad who has provided a lunch at home.

After a year of finding our feet, taking it step by step our work with the school children is beginning take on a routine that suits their abilities and their family life. We are going to provide what ever the children need every afternoon of the week. This includes learning to swim and riding, help if necessary with homework, and continuing with the three afternoons having fun with me!

It sounds a lot but it will be calmer than the coming and going they have had when school finished earlier.

Jolly professor does not fall over in the group anymore. His balancing act on the bench, his stepping stones practise, walking in the street and on the field, and walking over and onto boxes all seems to have made him at last aware that he has feet. What’s more he looks where he puts them.

He is also aware that things are sometimes in his path, because of this awareness he has improved so much that he almost can cycle home from school all on his own! He looks where he is going.

There is just one obstacle in his way to achieving this independence. One piece of pavement, where all the children and mums with prams cross over, is just too high for him on his bike. We are getting in touch with the council to get it lowered, citing of course not only his bike but the mums with their prams too.

Going home alone in the second school year is really the thing to be doing and we are getting there with these children.

It is such a lovely feeling to see Little Princess look at the clock and realise that at 16.20 she must get on her way as someone will be waiting at her garden gate. It has been a joy to observe how quickly she has got into her new routine and with so much pleasure. She checks that all her belongings are in a heap for someone to collect later then she make her way to her rolator. She asks me to buckle her in (for safety reasons when she is out and about alone), and with a wave to her friends she is off, homeward bound. It is something so matter of fact for her but at the same time she still enjoys the gasps of astonishment from the other mums who pass her as they collect their Kindergarten children.