"Kites rise highest against the wind, not with it" 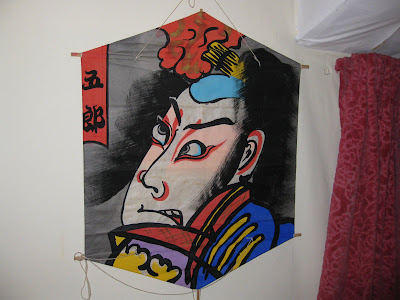 The first bit of the title is a quotation, attributed to Winston Churchill, that has remained with me since I discovered it, when kite flying was a great passion and kite making was one of the ways that I made my meager living as an artist. That was before I trained as an art therapist and art teacher.

The second part I have pinched from a friend who said it in a response to the first bit, and how right that friend is. Although I must add that different types of kites need different levels of skills, and securing and making some soar is easier than others. There is something for everyone to excel in.

Kites have remained a passion of mine since I made my first green cloth and balsa wood one with my Dad in his workshop. It then flew on the beach at Walcot, the nearest seaside spot to home. Mybe I was seven or eight years old.
High as a kite
During my first year at art school a few of us made kites to fly on the beach. This was in our last few weeks together after we all had our places on degree courses. We were having fun creating without needing to make works of art for our portfolios.
We made the perfect high-flier, a sled kite from black dustbin bags that flew extremely illegally at a mile high, without someone at the controls but well secured. We tied it daily to the pole that marked our place on the beach on that wonderful hot summer of 1976. The pilot of the plane that took tourists along the coast at low altitude never complained because it was probably too high for him to see.

Our greatest creation and greatest loss was the kite made from two broom handles and a huge sheet of plastic that was collected as jetsam one day on the same beach. We had to choose a day to fly this heavy kite when the wind was blowing a gale, off the land. We had a line tied to the main flyer's belt to be held on to by the rest of the flying squad! We held on tight but we had underestimated the strength of the wind and the capabilities of the kite. It would have soared against the wind but the line unfortunately was not strong enough and at the height of about 30 feet we lost this creation to a very choppy sea.
Making my own
Years later, after art school was over, I began to make kites again; I made stunt kites to order. I wonder how many of them are still being flown.

I bought the rip-stop-nylon that I used for these huge creations from one of my favourite shops in Covent Garden, the Kite Store. I would then spend many relaxing hours sewing the gorgeous- coloured shapes together on my machine just as if I was painting a picture. I loved to sew the pockets on where the cross spars would fit into and then fiddling with the fishing line and swivels, adjusting and trying them out until at last I had them launched.

I only passed a kite over to a customer when I was able to launch it alone. This was when living on an island wass extremely advantageous. There is hardly a day that passes when there is not a wind strong enough to launch a large, two-stringed stunt kite alone.

One day a friend of mine turned up with a set of four Peter Powell stunt kites for me to fly in tandem. The same friend then added, over a short period of time, three more in different colours! I had the strength in my arms to control them but when a strong wind was blowing I did not have the weight to stay on the ground when I played with all seven. My feet never actually left the ground, but there were times when I was dragged across the park shouting to my friend to get hold of my belt again!

It was fun, especially when flying them at a site where other kite fanatics spend their Sunday afternoons. The skies looked spectacular. with kites soaring against the wind with just the right amount of skill at the the controls.

I still fly kites now and then. I have a store in the cellar in Nürnberg of large, fast-to-assemble, stunt kites for flying on a hillside just up the road from work. In autumn and in spring it is a sight to behold, with swarms of what in German are called "dragons", filling the skies.

I fly a kite now and again from a Norfolk beach too, if I remember to put one in to my pocket as I leave the house.
I still have kites stashed here and there so I am always ready for the occasion when someone suggests testing the strength of the wind.
Hong Kong
I hope that this passion for kites and the flying of them will be rejuvenated to some extent when I make the trip to Hong Kong in December.

Opposite me as I write this posting are two kites hanging on the wall that have never been flown. These equisitely painted paper kites were presents given to me by the same friend who presented me with the seven Peter Powell stunters. They were his gift when he returned from music tours in Japan and Hong Kong. I remember how, when he had asked me what I would like him to bring back, and later when he had described how difficult it was to choose between the hundreds of kites in the shop, that I had day-dreamed about being there and choosing for myself, of even being able to watch or join in making and painting a Chinese kite for myself. The kites have remained with me as a reminder of my dreams.

I never dreamt, however, when I was still a struggling artist, only just beginning my training as a teacher and art therapist, that I would ever be going to Hong Kong and that there would perhaps be the opportunity while there to fulfill yet another of my dreams.

You never know, if I can learn to paint a scroll in December then perhaps I will also discover a way to create my own Chinese kite.
Posted by Susie Mallett at 04:01