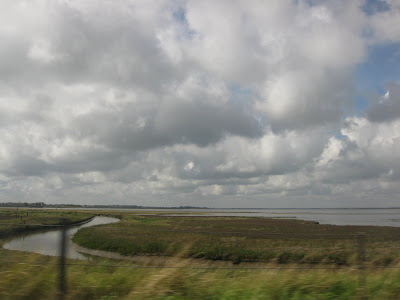 My young client in northern Germany, the one I usually refer to as Laddo, tells me, more than most do, that it seems like magic to him when he discovers a new trick to help him gain greater control of his out-of-control athetoid limbs.

Many other children and adults have said that is seems like magic when we discover a way of doing something that gives them success. I always try to convince them that it is their hard work and not magic that does the trick but, just like all of us, they generally like to believe that a little bit of magic is involved.

Whatever they choose to believe that it is, it always makes them smile. As they use their new-found “magic” trick more and more in their lives, they smile more and more. They are really happy with the new-found freedom of movement that they have discovered. This is the hard work that "magically" transforms their lives.

A copy of the London Evening Standard fell into my hands yesterday. There is a lot more to read in it than in many of the British national papers so my perusal took quite some time. Eventually I reached page twenty eight, where a headline caught my eye:

Whenever I make a presentation about my work, I always begin by explaining that the most important thing for me is to discover, for a conductive upbringing to be successful, is what motivates my clients. When I can motivate my clients, when I can find out what it is that sparks off their lust for life, they become active and their souls become healthy, they begin to be able to motivate themselves. As we all know, with healthy souls all activity becomes easier. The will to live active lives becomes the motivation to be active.

There goes that conductive spiral again!

There before my eyes in the London Evening Standard was a lovely story about children with motor disorders attending a “Magic Camp” at Guy’s Hospital in London. It sounded just the right kind of exciting stuff for motivating little boys and girls and developing healthy souls! This article reminded me very much of my recent stories about "Papier Maché Camp" and "Dinos and Aliens love Underpants Camp".

Magic, dino, painting or papier maché camp, call it what you will. Whatever the name it all comes down to the same thing in the end, finding out what motivates clients.

“A boy of eight whose hand was paralysed by a brain condition has been helped “by magic” after undergoing pioneering therapy.”

I thought the wording a bit misleading in this first paragraph, it suggested to me that the child was “undergoing” something passive, something was being done to him, but I have been reassured that this is language used these days in England when talking about "therapy". I suppose that I really would have rather liked the headline to read “Conductive magic camp at Guy’s hospital”. Maybe one day!

The young boy attended a ten-day camp during which he learned “tricks developed for children with motor disorders by Magic Circle magicians”. Presumably the same tricks that children without a disability would perform, but adapted how and when required.

We are told that this child left the camp able to throw a tennis ball and to eat using a knife and fork. He could also complete complex actions, such as opening a packet of crisps or undoing a sweet wrapper.

I am still thinking that the title would have been better if it had said “Conductive magic camp”!

At the camp children were taught card games and circus skills and magic to make them use the affected limbs.

The Magic Camp followed on from a pilot project when Magic Circle magicians worked alongside the occupational therapists from Evelin Children’s Hospital to develop exercises.

I think I may be putting my Paper Maché Camps on the market soon, as we thought that they were quite magical too.

I have written about magic before:

Last month, I was invited for dinner to Dr. sarah capelovitch (a very known Israeli Phisitherapist, and former resident of EBTA-Israel, NDT instructor) who invited Dr. Dido Levin, an OT from London, who runs the research mentioned in your link:

"Now an international research project is being undertaken in collaboration with the Ichilov Hospital in Tel Aviv, Israel, to formally test the effectiveness of 'magic therapy' to enhance conventional occupational therapy programmes for children with motor disorders.

The study comprises an assessment of all the participants two to four weeks before the camp starts, at the very start of the camp and at the end of the camp to measure their progress. There will be follow-up assessment at three and six month intervals after the camps have finished in order to assess the impact of the programme".

Sarah, to remind your readers who particpated in TK's conference in 2007, participated in the round table discussion moderated by Prof. Peter rosenbaum, on NDT Bobath and Conductive Education, and was a cowriter of a paper recently published on the above.

Anyhow, Sarah invited Dr. Dido Levin to that dinner as well. She lives in Israel at the moment and runs these 'magic camps' and research in Ichilov Hospital. She works mainly with children who have Hemiplegia and the outcomes look promising.
We discussed optional ways to integtate 'magic' program into the conductive daily routine.

You may visit this link to see in your own eyes parts of this experience, and understand at least, Dido's words in English:

You can, of course, try to translate the Hebrew text attached

Susie, a couple of comments from me.

Isn't it sad that an attempt to humanise a mechanised hospital environment, for children or for adults, it matters not, is a matter of public notice. What is remarkable is that it not taken for granted that a pleasant, humane hopital stay, should be other than the expected norm. You don't need the injection of magicians, or clowns, to achieve that, rather you need staff and atmosphere that unite the corporeal with the psychic, so that the good of one feeds into the good of the other.

A 'consultant conductor' could wreak marvels there ("miracles", even). Of course it would not be allowed. Some clown of a quite different kind would step in and say that CE is 'controversial', 'unproven' etc (maybe even something worse, like 'foreign'!)

Sauce for the goose! Put it differently, the burden of proof.