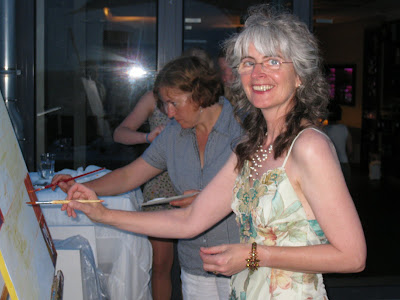 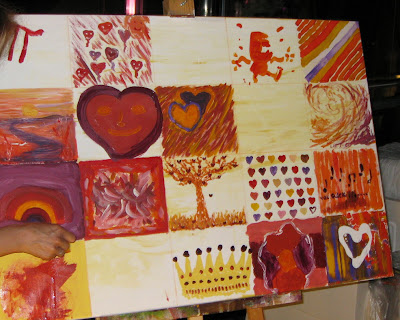 There was even painting at the wedding!

For me there was no difficulty choosing. I was there at the wedding on the dot but many others arrived over an hour later having watched the Germany v. Argentina match through to the very end. Thank goodness there was no need for extra time, we would never have got round to the food and drinks!

We, at the wedding, really marinated in the good life on the top of the world on a roof-top terrace in Nürnberg while below in the streets the whole city celebrated with us!

We were celebrating the wedding of two people who we all knew. Although we did not all know each other at the start after a few silly games and getting-to-know you chats we soon did.

At the same time Germans all over the world as well as in the streets below us, celebrated yet another four-goal victory in the World Cup!

The wedding was a happy occasion for us all. As for the football, that’s another story. The victory was sweet for the others but somehow it did not touch my heart and soul nor those of the Dutch and Hungarian ladies I was talking to just at the time when the waiter decided to transmit the news to us that Germany had won. We did try to explain that he had actually picked the wrong three to share his excitement with but he was already off to open some more bottles of champagne!

However long I live here I doubt that I will ever become a fan of any football team other than one from my own country. The other two ladies said the same.