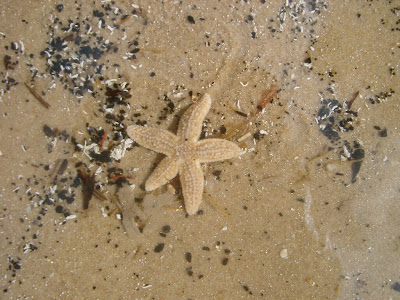 "Summertime"
Sheringham, 2005 by Susie Mallett
... has for several days not been conducive to conduction

But the show goes on!

The 37° Celcius hot, humid days, often ending with a cooling breeze, thunder and lightening but usually no rain, go on and on and on.

We are not complaining far from it, especially after the long cold winter. I am loving the cycling with water bottles filled to sprinkle my arms and legs on the way to work and back again. To cool off in the groups either we sit at the table to paint or to sew, to eat and drink or to play games with our feet in buckets of cooling water, or we wipe ice-cold cloths over our arms and faces.

Hitzefrei is when school is out early because of the midday sun. Mad-dogs and English-men may enjoy it but German school children certainly do not and sometimes they are allowed home earlier than normal.

"Today was Hitzefrei" said one of the eight-year olds last week " but that did not help me much" he continued, " as I had to stay on for the fifth lesson for French!".

Despite the heat and having to stay on until the end at school he and the others did their best and more in our conductive afternoon sessions. Achieving several more new "firsts" in the muggy heat.

One littlie is walking several steps alone now and another who trips over alot because he forgets to look where his feet are taking him, now walks along a three metre long and thirty centimetre wide bench, alone. (That is one foot by nine feet for those who are not yet metrically inclined). That is actually quite long and very narrow for someone who rarely takes a look at what his feet are doing.

He did not only do this dangerous feat once but four times, all in the space of two hours!

At first I was told:

"I can not do that, it is far too dangerous"

Then later I was asked:

"Can I do that again? It is really very adventurous and full of danger, spectacular like in the circus."

That is how my little client talks, he who is eight going on eighty! He who has word after word of wisdom and wiseness and one new achievement after the other. Two years ago he cried at the beginning of a "petö" session now he comes in raring to go, full of life and ideas.

Just this week he asked if he can come to me just four times in the summer holidays as he would like to make himself a pirate. A pirate that he can step inside and move around in! He believes four days will be enough time, perhaps he is right.

We shall see what develops.

I suggested he started to gather the materials he needs now. As we say in our group anything is possible we just have to discover how! That goes for building pirates just as it does for balancing on benches.
Posted by Susie Mallett at 19:59