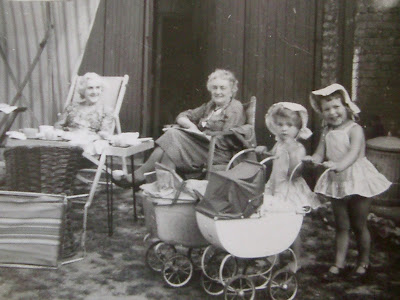 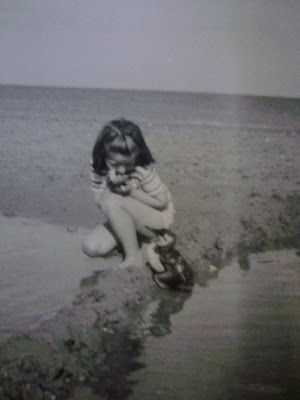 "Me and my summertime friend, an oil covered guilimot"
Walcot, 1962 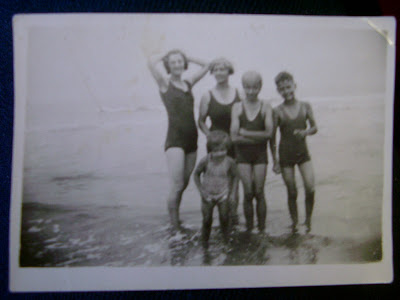 "Great Aunties Doris and Ethel, my Mum with her cousins John and Sue"
Hunstantin 1935
Remember those long school holidays? All those weeks when you woke everyday to sunshine streaming in the window?

On such days I would run down the stairs and straight out of the back door with the dog, jump into the paddling pool or on to my trike! I probably ate my breakfast on the bike, dinner and tea too if I could, unless Mum bundled us all in the car for a trip to the seaside. Something she did very often, leaving housework for a rainy day.

I vaguely remember other summer days crawling around on my hands and knees, beside my cousin and my Dad in the garden of dad's childhood. We would be catching crickets for hours. We did not catch them to keep we just liked to feel them in our hands and see how small we could make the hole that they hopped out of.

I do not think that I ever saw crickets anywhere else when I was a child than in that wild piece of garden beside the hen-house belonging to my paternal grandmother. Dad told me that they were there too when he was a lad, I expect that is why he searched for them with us.
This last week has seen many of those extremely hot, still days, when the leaves on the trees curl up. I experienced such weather for the first time as part of real everyday life when I lived in Budapest. That was when I realised why half of the population of the Hungarian capital migrated to the lake at Balaton for a couple of months each summer. Despite Budapest's river, Margit Island with its glorious lido, it was simply too hot to stay in the city. Those who had the time, and a place to go to, escaped to the water at Balaton.
Last night as I walked home from my friend's house, where we had spent the afternoon and evening painting with her three children (and about six more from the neighbourhood) in the shade of the back terrace, I was transported back to my first summers in Budapest. The memories were jogged because of the noises coming from somewhere either to the left of me, to the right of me, behind me or even in front of me.
The cicadas were singing

Those bright green creatures that make a noise that seems much too loud for their size were out and about.
Perhaps they were rejoicing over Germany's final win in the World Cup for third place, but I doubt it. I think they were just enjoying the heat and the calm of the evening as I was.
The noise of the cicadas is a noise that I love. It brings back happy memories for me and also my enthusiasm for all new discoveries in nature.
However it is also a noise that people hate because it is so monotonous. Sometimes on those hot, sticky nights when the window is thrown open in hope of a cooling breeze, just one, a single mini-cicada hops in and before you can say Jiminy Crickets the noise is ringing in your ears all night. The tiny fluorescent-green insect impossible to find as the direction of the chirruping can not be located.
On the balcony

Last night for the second time this year the cicadas were out chirruping, I sat out on the balcony hoping to cool off but at 31 degrees at midnight still no chance of that and remembered summers at Balaton where on the shores of the Lake the cicada ensemble competed with the frog orchestra for the Budapest audience's attention.
In the summer time

I had just started school when in 1964 or maybe 65 I bought my first single, Hello Dolly by Louis Armstrong. The next single, In the Summertime by Mungo Jerry, was purchased a few years later in the same tiny record shop in Sutton Coldfield's high street. My sister and I, on both occasions, spent ages making this very important decision. We were about to give out a huge amount of our holiday spending money so we had to be sure that we bought the right one. Our pocket money amounted to only a few pennies a week at that time so I suspect we both had been given a crisp ten-shilling note by my Grandmother with the lovely silk underwear and a pot of sixpences by the other, the one with chirruping crickets in the garden.
Both Louis and Mungo Jerry got played on the gramophone player at home until they could be heard no more then they were replaced by Sweet and Slade, the Seekers, Cliff, Lulu and Mary Hopkins. for the next few years we saved up our pennies for weeks then went off to Boots' record department on a Saturday morning to listen to our choices and then decide which of us had first pick this time around.
Ch chch chch chch ch ch

Sis was a bit more up to date in her taste than I was which is why we got Summertime, and a few more update songs in our small collection. Hello Dolly was not really what they were listening to in the discos at the time! I loved her choices too especially the ch chch chch chch ch ch and the da dada dada dada du da. I expect I was reminded of a train!
Many years later when I was an art student, I worked at a recording studio in Surrey, to earn some extra pennies, there were no more crispy ten-shilling notes coming my way, Grandma had sadly died.
I was on the floor of the playroom in this huge stately home looking after the children of the owner when who should walk in but Jerry Dorsey looking much the same as I remembered him. He had got lost in the mazes of corridors and rooms so I sent him off in the right direction. I had been so surprised to see Mungo himself walk into the middle of our lego construction and Barbie-Doll tea party that I had said little more than was necessary pleasantries, but I spent the rest of the evening with my memories humming ch chch chch chch ch ch to the somewhat bemused children.
Notes
Jiminy Crickets! - 1984 -
http://disney.go.com/vault/archives/characters/jiminy/jiminy.html
Hello Dolly, Louis Armstrong 1964 -
http://www.youtube.com/watch?v=kmfeKUNDDYs&feature=related

In the summertime - Mungo Jerry, 1970 -
http://www.youtube.com/watch?v=3sgrPXP1n2E&feature=related