At last enough raindrops to cool the air 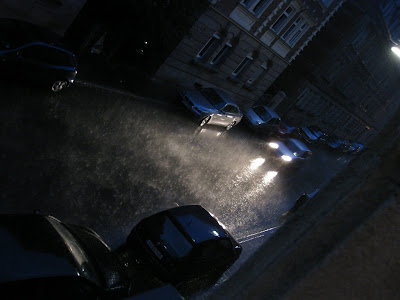 It is nine twenty, pitch-dark, and I am cool for the first time in days.

Yesterday at about the same it rained about two drops, not enough to cool the air at all.

About an hour ago I wrote:

'I think I hear the thunder on its way. The swifts and house martins are swirling around catching their tea and squeeching like crazy because of the coming rain.

Even earlier today, at four this afternoon, I left my bike at home and walked with a brolly in my bag as the skies looked ominous even then, and the wind, still very warm, got up.

Now we have the lightning too and some gorgeous rain. My neighbours and I at the front are all window-hinging. I tried to lean out so far as not to fall, but far enough to get wet!

My balcony is in the tree tops so there is no chance of getting wet out there. The downstairs neighbour’s child is out in the yard dancing in her bare feet and a T-shirt, something that I would be doing too if I lived on the ground floor!

What a relief to be cool again. Even if it was only for five minutes. The rain has eased off, the thunder and lightning will do the rounds in Johannis for the rest of the evening and I expect that, when I get up to cycle to work tomorrow, it will be just as hot as this morning, already thirty degrees celcius at eight-thirty.

Now I have the door at the back and the window at the front wide open, just like everyone in the whole street has. We are all enjoying the breeze while it lasts. A pity we can not bottle some of the lovely refreshing air for tomorrow.

I plan on leaving an hour earlier tomorrow, just so I can enjoy the ride a bit more. Maybe there will be a few sprinklers near enough to the cycle-path so there is enough spray to cool my legs as I ride past the fields of radishes, and onions and lettuces in all shades of green, from almost black to yellow.

It is so nice to live in the city. I meet the neighbours in my house now and again. Sometimes this is out the back at the bike-stands or on the stairs, but when it rains like tonight, or at New Year when there are fireworks in the street, I get to meet and speak to the people who live high up in the flats opposite me too.

Time to switch off

The really loud thunder and bright lightning strikes have arrived. I was just about to write that I was so glad to be cool that I had forgotten my fear of the lightning. I really had for a while but now it has returned as the skies light up and the thunder crashes very loud. The rain has stopped.

As a teenager the old wall beside our house was struck by lightning and a circular flint with a diameter of five inches splintered away and flew straight thought the window where I was standing. It bounced from the wall out through the window again landing under my Mum’s car. I have never really conquered my fear of thibder and lightning since, but I did manage to hang out of the window with the neighbours this evening and sit on the balcony with a cup of tea when I has switched everything off to avoid electrical problems in the storm.

The rumbles continue and the raindrops have long since ceased to patter on my metal window-sills but the breeze is still blissfully cooling.

Great Pic. Is that Harry Lime watching you from the doorway across the street?

And are you the woman in the window?

Thank you for this Andrew.

It is one of my favourite books and is my favourite film of all time. It was lovely to see this sequence again, and yes you are right it could have been filmed in my street.

As for the woman in the window I think the neighbour opposite, who was also window hinging on Monday, would do better in the role than I would.