Blogs, cyberspace and keeping the ball rolling between blocks 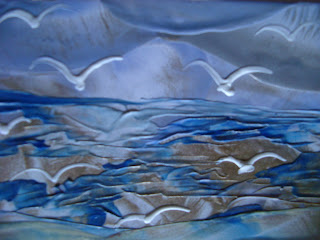 Following on from Wednesday evening's comments on not enough time to read too many blogs, I am not complaining: life is getting really interesting on the blogosphere and I am meeting and communicating with lots of interesting people. Last weekend I spent some lovely “bits in between” times (between house work and paperwork) involved in an interesting discussion about mentoring on Andrew Sutton’s blog, the thread of which Norman Perrin also took up on his blog this week. Norman’s blog I always have time to read, usually late at night so I can be lulled into sleep mode by his lovely music.

Exactly at the moment when I was writing the bit in my blog
(http://konduktorin.blogspot.com/2008/11/just-quiet-evening-for-conductor.html),
about hoping there isn’t anything interesting written so that I will have to stop to read it, I got waylaid by yet another interesting read that developed into a chat on Skype at one o’clock in the morning. That’s a time when all good conductors should actually be in bed and here were two conductors meeting only for the first time ever, and that in cyberspace. Of the two of us, though,I was the only one actually burning the midnight oil, due to the time differences. We are going to talk almost in reality through Skype video at the weekend!

This morning I did as Andrew Sutton suggested on his blog, that we write to Célia Diva Renck Hoefelmann for her full report on Conductive Education in Brazil. Mine arrived within hours of requesting it. I have had no time to read it yet it will be left for a quiet hour in Norway! Yet another new connection in the world of cyberspace, as is Norway but that will soon be reality.
I wonder who else will read the report and join in any discussion about it, apart from Andrew, Leticia and Becky. I doubt if anyone else in Germany has come across it yet.

Yet another development through blogging and cyberspace is “Doing a Dina", which you can see on the right-hand column of my blog. This came about in response to a letter on the Conductive Community Forum where I offered my services, long distance, and with home visits, to families wanting to bring their children up conductively.
This idea has actually taken off, not with the original family from the forum dialogue but here in Germany with a family with three-year-old twins. We have been phoning and emailing for a few months now and will meet for the second time in January.

I have been reading the blog of the Lieck family for a long time now but a recent posting caught my eye, also mentioned on Andrew Sutton’s blog “What to do between blocks”. The posting is called "Steps Forward" and Mum, Jacolyn, is questioning whether she is doing enough now for her daughter who came on in leaps and bounds during an intensive conductive block. Once back home Mum feels the that the steps forward became slower and there seemed to actually be steps back. I responded to this posting with a comment, I believe that I was the only conductor out of ten people to comment.
This subject has concerned me for a while now as there are many summer camps taking place each year where children and conductors are shipped in from miles away, and there is often no opportunity for house visits or support afterwards. The children with their families also come from miles around, making any kind of follow up difficult. Maybe this is a case where cyberspace and “Doing a Dina” could come in useful, distances do not seem so important any more.

I think that this will be a subject for a longer posting later but here are just a few of the questions which jump into my mind at this moment.

Many parents see so much progress and often don't know what to do next.

Notes
Andrew Sutton
Well, shall we discuss it? Evaluation from Brazil
http://andrew-sutton.blogspot.com/2008/11/well-shall-we-discuss-it.html

What to do between blocks
http://andrew-sutton.blogspot.com/2008/11/this-was-published-last-week-on-jacolyn.html

Lieck Family
http://lieck3.blogspot.com/2008/11/3-steps-forward.html
Becky Featherstone- this is the conductor I was speaking to at one in the morning
http://beckyinbrazil.blogspot.com/
Posted by Susie Mallett at 07:02