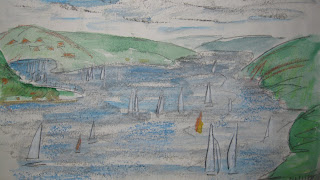 It seems likes months ago since the congress in Munich and since then I have been on the trip to Budapest with all its angels, something which was missing in Munich (angels that is).

I will now try to conclude the report from Munich and get on with what happened in Budapest and in between the writing I will try to do some painting and think about what I will need to pack in my bags for Norway (that’s the next trip, in two weeks).

My memories of what went on in Munich have taken on a different colouring since the trip to Budapest, or maybe I have a clearer picture in my mind of the differences that I experienced in these two completely different worlds.

My images from Munich could now be compared to those photographs with a sepia or hand- tinted colouring that my great aunt used to produce in the 1920s, using her paint-box to liven up an otherwise quite dull photograph. Or as a moving image they compare to the films produced in moments of my childhood which we projected on to the wallpapered wall with a clickety-clackety projector, the film constantly getting stuck then burnt.

A question of tone

My images from Budapest are only two weeks fresher in my memory but still I compare them to the more cosmopolitan modern world of digital photography, brightly coloured, clear images, making use of all the up-to-date knowledge and information available.

The brightly coloured visit to Budapest was dominated by the conductive Seele, it was there to see and to feel with whoever I spoke to. This is what I missed most in Munich, there were very few like souls, not enough to adhere this group of people together as there were in Budapest. In Budapest we were all in the same boat, in Munich it was like we were at a regatta, all trying to get to the start with the best advantage, jostling for position as the winds changed direction, reflecting just how the direction of Konduktive Förderung in Germany is ever changing.

(Or is it? Is it more likely that Konduktive Föderung is what it always was but getting bigger and more powerful and that Conductive Education is getting smaller and being nudged out?)

What about these small groups of people dotted around the world, we don’t have to remain so isolated these days with the Internet. I realise as I meet more people in Conductive Education that there is a bigger world than Germany, and many conductive souls elsewhere. These are the people I begin to communicate with.

The difference between Conductive Education/upbringing and Konduktive Förderung is perhaps a little clearer to me since the German congress, though unfortunately I missed the opportunity in the round-table discussion at Munich to ask Dr Karin Weber what she actually meant when many years ago she gave this name to what is practised in Germany

I think that Konduktive Förderung is turning into what is described in the passage that I translated from Andrew Sutton’s posting "German conference reports, Where's the elephant?" http://andrew-sutton.blogspot.com/2008/11/german-conference-reports.html, or maybe it always was this.

The one definition is very clear to me, that of the conductive pedagogy that I learnt about at the Petö Institute and which I practise daily. The other, the one that I encounter in Germany on my travels to different centres, I find increasingly difficult to define, with its fuzzy overlapping edges and lack of clarity in direction. It seems that every day it means something else, and the people who are most confused by this are the parents.

We no longer have a mother-and-baby group in Nürnberg at the moment, so when I am approached by parents of young children and babies who are looking for conductive groups I have difficulties suggesting what they should do. At the moment there are still one or two German centres to recommend and after that I suggest they go to Hungary or to England to see for themselves what conductive upbringing really is.

I do not use the term Konductive Förderung in Germany to describe my work. I say Konduktiv Pedagogik and many of my clients say "Petö"! I do not correct them as I prefer them to say this to Konduktive Föderung, both for myself and to give more of a sense of what we are actually doing. It was so nice in Budapest last week to be speaking in English and to use the term "conductive upbringing", which I know describes what I want to say and is understood! When I talk to parents or adult clients I think it easier for them to understand what Conductive Education/upbringing is when I use the German words for upbringing or pedagogy and not Konduktive Förderung.

Sadly, at the Munich congress Dr Schaffhauser, the director of the Petö Institute was programmed to speak in a parallel session on Saturday afternoon, which meant not everyone got to hear him, and it was almost at the end of the congress anyway. It would have been nicer to have introduced him earlier, so that he could have started the show off , talking to all the 200-plus participants, everyone would have then known who he was and could have had more time to pose their many questions. Instead the conference began with reports given to the whole audience of various research and pilot projects in Germany.

As it was, later, Dr Schaffhauser spoke about the new training courses being offered at the Petö Institute, he invited conductors, "multi disciplinary conductors" and "pedagogic-therapeutic-conductors" to apply for the master’s degree course that he hopes will get off the ground in 2009. The association for conductors working in Germany wishes to work closely with the Petö Institute to establish a university training course for conductors in Germany. Is this united front going to improve matters in Germany as far as training is concerned? Is there really a driving force, an initiative wanting to change the direction and re-establish Conductive Education on a stronger footing? I can't answer this, we will wait and see.

What did I miss most at the Munich conference? Apart from a uniting Seele it was representatives from the rest of the conductive world. Where were they? Not interested? Not invited? I don’t know but I wasn’t the only one present to notice their absence. Thank goodness for cyberspace is all I can say, those of us who wish to know what is happenning in the big wide world of "conduction" need not feel isolated anymore. I for one am happy to find many like souls online.

My previous blogs on this conference:

The full congress programme can be found on the website for conductors working in Germany, the Bundesverband Verband der in Deutschland tätigen KonduktorInnen e.V:
http://www.konduktorenverband.de/index.php?page=ueberuns

Hello Susie. I wanted to respond to your posting with something insightful and compelling but somehow it wouldn't happen.

Instead I glanced across at your list of 'Womanly Women' and after first clicking on Joan Armtrading (who was an early dear friend of Paces), I began to realise that these were all YouTube clips and that someone, a great woman who died just a few days ago, was not on your list. A check on YouTube offered many clips to choose from but one was absolutely enjoyable - mostly because of the introduction to the song. Listen out for the punch line!

Truly a 'womanly woman' who has inspired so many women and men.

Nothing to do with CE. Just offered as a sort of 'gift thought' which I'm sure you will enjoy.

Hi Norman
Thank you for your wonderful gift, it will be over on the right hand side of my blog as soon as possible!
It touched my soul just as much as something else as insightful and compelling would have done, both you and Miriam Makeba speaking in my language!

It was just thirty minutes ago when I was sitting in my kitchen drinking a cup of PG Tips that I read in my new Time magazine all about this amazing lady and I realised how little I knew about her. I was about to google her when I found your comment. That is probably what some people call synchro-destiny but it is what I call the conductive seele at work!

Joan Armatrading was singing in Nürnberg main market place this summer just a stones throw from my flat, I was there of course bobbing around just as I am now as I listen to Miriam Mabeka on You Tube.
Thanks Norman for the new addition to my "Womanly Women" column, it certainly belongs amongst the higher class items in my collection!

Thanks also for being a faithful blog reader!