Angels and souls, to me it's one and the same. 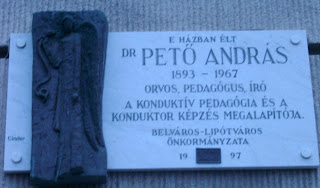 We all have angels in our Seele!
Of course we do. I think that is what I have been saying for ages!
There are all sorts of angels within us and I think the one that Dr András Petö talked about was part of what I call the conductive Seele. Of course we all have an angel within us and of course Petö would have believed this too! And maybe now I can write about it and not get carried off by the men in white coats!

After reading Andrew Sutton’s posting about Petö and his angels I immediately did two things. I looked out the photo that I have of the plaque in Balassi Bálint u. with its angel and I stuffed my copy of the Unfug in my bag to read on the tram , as I knew I had read something in there about angels, then off I went with my treasure chest to work!

All day at work there were more angels tugging at my memory bank and I have just discovered the one that will be action number three. I called on a Hungarian to help as I hadn’t believed in my own translation, but I was right: I had found the words again referring to the angel inside us.

The result of the first of my early morning activities is at the top of this posting, the photo of the angel in Balassi Bálint u. that I took on my visit to Budapest last year.

The second of the actions was to get the book out of my bag on the tram and open it up to begin my search for angels. This search turned out to be nowhere near as difficult as I imagined it would be, as the book fell open on exactly the page where Dr Bärnklau (alias Dr András Petö) mentions angels! Maybe not a coincidence at all but perhaps it was the angel within trying to communicate with me. I think that it is the only mention of angels in the whole book, but I could be mistaken and I will continue the search. Dr Bärnklau’s book is, however, full of references to the soul and, as I said at the beginning, I think as far as Dr András Petö is concerned the "angel within us" is a part of our souls.

This is what Bärnklau wrote:
If an illness comes into the realms of God’s influence, the Ens Dei of Paracelus, we enter the area of mercy, grace and favour and of healing through belief and prayer. The saints of the holy sites of pilgrimage, such as Lourdes, belong to this category as do theologists who believe in and speak about the work of the angels, together with that of the saints, in their sermons. Many people pray for the healing properties of these angels and saints.
He continued with references to the equivalent in eastern religions, in Indian belief, the Karma, the fate that man prepares for himself, how man can train his soul, his inner self, through Yoga and moral changes throughout the wheel of each successive life, and how he should be able to avoid or heal, by implementing these methods, the inevitable, pre-destined illnesses.
In this passage I think that Dr Bärnklau was using reference to the Christian angels, and our own predestined fate as spoken about in the Karma, as one and the same, the inner voice that speaks to us.
Angels, karma and Buddha

Now on to action number three. I was sitting here at my desk so tired that I was wondering if I should go to bed, and I had one of my “eureka” moments. I remembered where I had read about Petö and angels. I knew that I had read almost the exact words that Andrew used in his posting, “We all have an angel inside us”.

I rummaged around for another article that I have, thinking “It was not only Németh Ándor who was acutely depressed and who met Petö, I have a reference to someone else somewhere”. I dug out an article that Gill Maguire had given me in the library at NICE and I found a story that is almost identical, so either someone somewhere got the name wrong or someone told the story twice with different names. Who knows, it isn’t really that important here.

I have the paper in my hand. It is written by Popper Péter, a Hungarian psychologist who is very popular in his homeland. His books are to be found on the bookstalls in Moszkva Tér today (they were there on Saturday when I looked).

This article is called Buddha Budapesten ( Buddha in Budapest) and it is an account by Popper Péter of his encounters with Dr András Petö, some of which comprises the interview in Forrai Judit's book Memoirs of the Beginnings of Conductive Pedagogy and András Petö.

The first reference that I found there to angels was when Popper was describing a conversation between Dr. Kun Miklós, a psychiatrist, and Petö. Kun Miklós had done Petö a great favour and Petö offered him anything he wished for in return, Kun Miklós said he would keep it in mind and return to collect on it later. This he certainly did turning up in Vienna just before the war started asking Petö to return to Hungary with him. I have read that there are several versions of this story about how Petö actually decided to return but it still remains a bit of a mystery, as do a lot of things to do with Dr András Petö and his life!
Of concern here is how Popper tries to explain Petö’s quite rash on-the-spot decision to go with Kun Miklós to Hungary. Popper says that Petö had once told him that the most important thing in life is that man must always follow his destiny (probably meaning as in Indian belief that one forms ones own destiny and must follow it). Popper asked Petö how can one know what is one’s destiny, or fate. To this Petö had replied
"There is always a voice saying to do this and to do that and you must not close your mind to the idea that an angel is speaking from within you”.

So there it was almost exactly the words of Márgit Balogh, librarian at the Mária Hári Memorial Library, as reported in Andrew’s blog, but that was not all. This was not what I had remembered in my eureka moment. Where was the story about the depressed patient? I continued reading the aticle and translating, with a little help from some Magyars, and in the next paragraphs I found this:

The news got around that Márai Sándor was depressed, he was being treated by Dr Kun Miklós with little success so Petö, who didn’t know Mária Sándor, was summoned. Mária was lying in a darkened room , groaning, as Petö stopped by his door and said in a firm voice
“ Sándor, get up and write! For that is your destiny in this world.”
Sándor replied “When God sends an angel to me then I will get up.”
To which the bold, fat Petö, with his hernia and banging his chest, retorted so loudly that the walls shook, “Here is the angel".
At which moment Sándor looked up at the angel and got out of his bed.
All this time that I have been searching for links between Petö and angels and, especially after re-reading the piece in Unfug about the theologists,the saints and angels from the Christian religion, I have been asking myself why did Petö not stick to his ideas from eastern cultures, with its Karma and destiny and souls?
Could it be that in those times the Communist Party would not have looked favourably on Petö and his belief in angels and saints but maybe tolerated better an interest in eastern cultures? Did a head full of angels strain relationships with the powers-that-be who ran his institute and make them less than productive?
As I read further in Judit Forrai's book I found here too a reference to something that Petö said which had caused embarrassment at a time when the Communist Party disapproved of the practice of religion. He asked for Kiss Ferenc, a professor and also the head of the Free Church to “Bless this house”, meaning his institute. This caused red faces but he got the building blessed!
András Petö remains a man of mystery surrounded by tales of scandal and eccentricity but as I discovered earlier in the year when I first read his book Unfug he was a man with a soul and maybe he was also a man with an inner voice, his angel talking to him and to others.
Notes

Ens Dei of Paracelus - this is the fifth cause of illness in man according to Paracelsus, God-given health and illness, the other four being astral (influenced by astrology), poison, bodily and spiritual.
Ens/entien – cause/ reason for the illness
http://en.wikipedia.org/wiki/Paracelsus