Stig and I in Norway 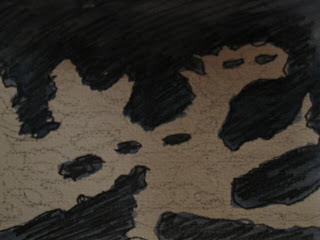 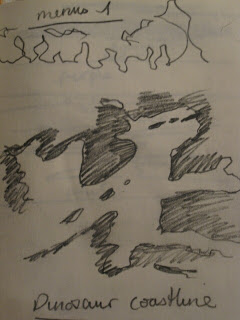 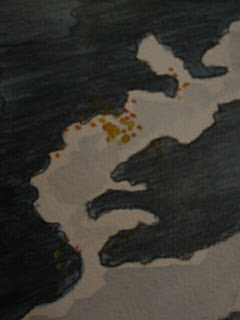 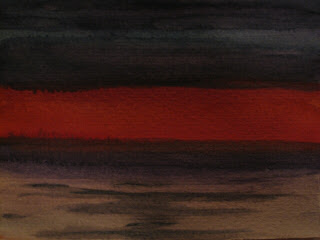 As I flew into Oslo I was amazed by the view out of the window. It was even better than the memory that I have of a flight from over twenty years ago.
On that occasion I was flying over the red centre of Australia and, as I woke, I saw below me a thin layer of beautiful, pink, fluffy clouds reminding me of the pink pigeons that I read about in Gerald Durrell’s book. Over Australia I realised that it was not the clouds that were pink but the desert sands glowing red below them, giving me the illusion that I was seeing the world through rose-tinted spectacles.

Coming into Oslo in semi-darkness I at last began to feel excited about this trip and less nervous. The view from the window just tipped the scales. There was the most brilliant orange, scarlet and red stripe along the horizon, sandwiched between two layers of a very deep purple, mixed with Prussian blue. Below this were grey areas on the ground and patches of almost white.
Directly below me I could see the “brain”-like lines of the fiord coastline that appeared to be full of shovelled-up snow, all white and fluffy. This was however very low-lying cloud thatwas hugging the coastline and giving an amazing range of texture and tones to the landscape below me. The coastline of Norway did actually look like it does on the map in my school atlas, and just as it did all those years ago when I was studying “A” level geography. It reminded me of a map of the brain.

From that moment on I was hooked on the landscape and after three days I am hooked on the language too. It sounds like everyone is singing to me, a bit like they do at home in the Norfolk dialect, but at ten times the speed.

I haven’t actually seen anything else of the landscape since that landing, as I have been at work for every hour of daylight. I do not really know what the outside of the centre looks like or the house where I am living, except that both are wooden and both covered with a lot of snow. It has been snowing since I arrived at work at eight this morning, and I am beginning to wonder how the 10-minute walk home will be. Will I be found looking like a snowman in the morning or will I make it to my warm bed?

I had four hours at Oslo airport waiting for my Hungarian colleague. This gave me time to get my phone fixed up with a Norwegian chip, get some fruit for breakfast, and do some train and people watching. The trains are shiny like in America, all silver metal and sleek looking. In fact everything seems to be shiny, even the people. I don’t mean they have brilliant white teeth like in the Colgate adverts, I wouldn’t know about this as I haven’t looked that close, they just appear so friendly and shiningly helpful!

There was no brightly dyed hair on the over-fifty-year old women, as you see in Germany, just blond or grey and the natural colours in between. Natural colours extend to the clothes too, thick functional coats and lovely chunky pullovers.

At last I boarded the train to Hamar, alas not a shiny one.I it was a very old rattling one but still a train. With my nose pressed to the window and Hungarian flowing easily from my mouth, I enjoyed the journey despite the darkness and the dull paintwork. And what excitement as the train pulled into Hamar, a roundhouse, like something straight out of a Thomas the Tank Engine film, nothing like the scale of the one I recently saw at the open air museum in Budapest but a roundhouse none the less .
First, second and now third impressions, all getting better by the minute.
Now I just can’t wait for the Hamar railway museum visit, which has been highly recommended and is on the cards for next week.

Thick ice and snow packed the streets at the railway station and around the house where I will stay for the next few weeks. This fluffy white stuff which falls from the sky is still something special to me, despite many years of living in Hungary and Germany where it is a more common sight than on the English coast. The stillness that it creates when it lies on the ground, the wonderful blueness that it gives to the night time, and the amazing nois e thatit makes when walking home, when the surface is frozen.
These are enough to make this adventure worthwhile, although I would still like to see where I am!

I arrived in darkness and the following morning I went to work in darkness. This has been the routine now for four days. I am waiting for the weekend so that I can see the world that I am living in in daylight, and hope that I can get my bearings and see what Norway looks like from the ground!
Notes
Golden Bats and Pink Pigeons by Gerald Durrell
Author: Gerald Durrell
Format: Paperback
ISBN: 9781840246353
Published: 4 February 2008
Publisher: Summersdale Publishers
http://en.wikipedia.org/wiki/Gerald_Durrell
The pink Mauritian Pigeon -A relative of the extinct Dodo and the worlds rarest and most endangered pigeon. Nearly extinct with a wild population in 1976 estimated at around 30 ...
http://www.durrell.org/About-Durrell/Durrell-News/Mauritius-Pink-Pigeon-goes-Blue/
Thomas the Tank Engine - http://en.wikipedia.org/wiki/Thomas_the_Tank_Engine
Colgate ring of confidence - http://en.wikipedia.org/wiki/Colgate_(toothpaste)
Posted by Susie Mallett at 19:46

Wow its sounds like Norway is just as beautiful as I imagined. It was nice to hear you talk about the snow, I am crazy waiting to return to England where it is expected to snow at christmas. I miss the English weather so much, never thought I would say that!

When I fly back to England I fly via Germany and I remembered landing there last year, a thick blanket of snow on the ground, it was beautiful.

Becky, if you are anywhere near Nuernberg on a stop over let me know and I will come to the airport for a cup of coffee.

Today the sun is shining and it is minus ten. At ten oclock this morning as the sun came up there was a gorgeous pink sheen on the snow on the distant hills.