The clearing fog did wonders for my Seele 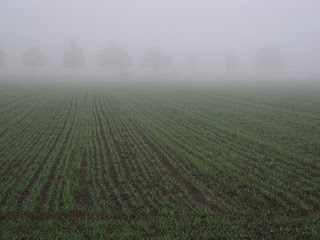 It was the final day of the block for my stroke clients today and as always I am sad. I love this group but we are just getting into the swing of things and it is over for the next few months.

They are developing into a tight-knit community with a real conductive Seele. We have a couple of jokers in the group who know that I don’t understand the half of their Frankonian wit, which is usually about beer- drinking and blonds, so they tease me all the more with it.

Today they made everyone laugh so much while they were all precariously balancing in knee stands on the plinths, that one by one they fell down on to their hands, back on to all fours.

What a success, all five of them saved themselves by supporting with both hands, and what was such a delight to see was that they realised immediately the significance of this and cheered themselves!

I don’t often get individuals to do difficult tasks alone in front of the others, but today I did. It was so nice to hear how these people with hemiplegia were trying to applaud as loud as they could. None of them thought to stamp their feet or to whistle or to cheer. Instead, they all wanted to clap, which they did the best they could, using two hands.

They were trying to motivate their colleague to stand up from the ground unaided, which of course with so much encouragement he quickly succeeded in doing.

So yet another instance of lightening the Seele and easing the movements. You can’t get more conductive than that.

In recent weeks my stroke groups have been asking lots of questions about András Petö and the origins of “Petö” , which is what most of them call what they do with me. I do not correct them when they use this term as I much prefer it to “Konduktive Förderung” which is the German alternative.

I always refer to what we do as Konduktiv Pedagogie but still they say “Petö”, which is all right by me as we know that we are talking about the same thing, and for someone with aphasia it is much easier to begin with saying just “ Petö”!
But are we all talking about the same thing?
There have been so many questions recently which has lead me to think that they still don’t all fully understand what we are up to here! It is difficult with some stroke clients to judge how much of what you say they understand. It is almost impossible to measure understanding, except perhaps when I give an instruction for a task, when I can see by the reaction if it is understood.

If this is getting complicated then it gives a good idea of all the different things that we are dealing with at the same time in a stroke group.

Today one client asked me for a list of tasks for homework and there was a look of horror on his face when I told him that he was to practise everything all day and all night. Another of the group jumped in and continued to explain to him what I had meant and it lead to us all getting a piece of paper and writing down what we would do at home, yes I say we because I had a piece of paper too. We all came up with lots of suggestions, including to drink beer, lifting the glass with the affected arm, gesturing while talking only with the affected arm, taking the coat from its hook with the affected hand, cleaning teeth with the affected hand. The list goes on. With all this brain- storming the client who originally asked about homework came to a much greater understanding of what his “Petö” is all about.
At the end of the brainstorming session we came up with a plan for the first sessions of next year. We will invite as many people as we can to attend one of the sessions, for example family members, physiotherapists and doctors. To begin with I will talk a little bit about conductive pedagogy and then we will continue with parts of our programme, inviting the guests to take part too. We will follow this with a sitfdown round the table, with a few cognitive tasks and discussion, and a cup of tea (made of course by someone in the group). I hope that when we do this it will lead to my clients' gaining an even greater understanding of our work together and give them the opportunity to spread the word about our work into the local community.

The picture heading my blog is one of many I took as I walked to work this morning. I was so glad that I had left my bike in the cellar and even more glad that I always have my camera in my bag.

It was glorious, the sun came out for just a minute or two and suddenly this row of trees appeared from nowhere. Then they remained hidden until almost midday when they suddenly became bathed in warm autumn sunshine.