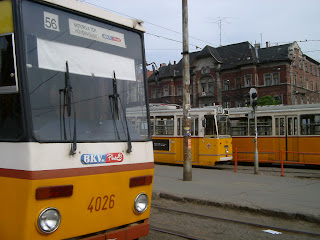 Moszkva Tér, one of the new city trams by Susie Mallett, April 2008

A really scary thing happened to me this morning and I shall have to tell a bit of the background before I start with what happened today.
When I returned very late last night from a five-day trip to Budapest I didn't see or speak to a soul except for the taxi-driver, who for some reason or other decided I was English and this is the language that he would use, and at that late hour who was I to complain?
I had been in Budapest to give the presentation that has been announced on the right-hand side of my blog for several weeks now. This presentation was in English, some of the other work was in Hungarian and the socialising and the touristy times were in a Hungarian/English mishmash,
not a word of German leaving my lips for five whole days.
I woke early this morning and at 7.15am I was on the way to work, having uttered not a word since thanking the taxi-driver in English last night. On entering the bus I asked what time it would be leaving, at which point the driver looked up at me with a very odd expression on his face. I asked again and the driver tried to speak to me in English then after he had pointed to the time on a piece of paper I walked quietly and very puzzled to find a seat.
At this point I had no idea what was going on, except that for some reason I had not been able to communicate with the driver. I have never been so scared in my life, as the thought suddenly came to me that maybe I had suffered a stroke during the night and my speech was the only thing still affected. All of this lasted probably for little more than a minute but it is amazing how many thoughts can fly through one's mind in such a short time. It is easy to believe what people mean when they say that their whole life flashes before them, if they have been in danger of losing their life. It was not my whole life as such flashing before my eyes, but a great many questions and fears. What was going on in my head, why didn't the driver understand me, was my speech slurred? Why had he spoken English to me? Why I am now thinking in English and not in German?
It was at this point that the penny dropped. All of a sudden I realised what had happened. The driver hadn't understood me as I hadn't spoken German, I still wasn't thinking in German I was in Hungarian mode with a sprinkling of English, but which language had I used with the driver? I tried out the question again " What time does the bus leave? I still had no idea how to say it in German, I could get about half of it out in English but I still could say very fluently Hánykor indúl a busz? (What time does the bus leave?)
I had been speaking Hungarian! It was actually a very nice feeling that after fifteen years living in Germany I could still get so involved in the Hungarian culture and feel myself so absolutely absorbed by it that the language took priority over even my mother tongue. I always love being in Hungary, I love being with Hungarians, I love Budapest, I can even honestly say I love eating the food and most of all I love speaking the language.
With the revelation that I had been speaking Hungarian it was with much relief that I continued my journey to work, knowing I had probably not suffered a stroke in the night and with the hope that enough German would return so I could get on with my work with the little ones. Yes, a complete change of clientel, last week the adults and a presentation about my work with adults and now for the next three weeks I am with the five year olds. I expect that I will write more about them in a later blog.
I walked in the door at work and the first person I met was a Magyar to whom I described, in Hungarian, my problem. I asked her to speak to me in German to try to get the ball rolling and it worked, it was enough to pull the lever to change the points. It was incredible how quickly I got back into German mode and all the fears of neurological damage left me. The children could understand me and I could now store my Hungarian language in a backroom to use again at a later date. I actually use it daily in some way or other but never to such an extent that it overrides the other two languages.
As usual I learnt an enormous amount from this experience. Most of all I can almost imagine the state of confusion that some stroke clients must find themselves in directly after suffering a stroke. I give thoughts to what happens to them if there is no one around to explain what has happened. I have read in many accounts written by sufferers that it is a very frightening and lonely period. I think it is perhaps an area in the treatment of stroke patients where maybe some improvements can be made, where more attention could be given to the person within the body, to the soul within the body, to the voice that is trying to break out.
Notes
Magyar - Hungarian
Posted by Susie Mallett at 12:23

Dear Susie,
You were just exhausted after your trip to Hungary. You had to adapt to new situations, you had to perform, you wanted to do your best and although there were some similarities, which you remembered from the past, everything was in a new context as life is when you step out of your comfort zone. There were new faces, new adventures before you with new expectations. I know how it feels as I travel a lot when I do my consultancy and training. People don’t realise how tiring it is to turn up in a new environment, adapt to it, deliver your best while you continuously observing, assessing the people individually and as a group within the given circumstances… to be able to give them what they need from you and on the level they can relate to it and understand it. It is both a conscious and unconscious collection of data, which triggers conscious and unconscious response. When I first came to England and I had to speak and work in English I had major headaches after a hard day’s work, especially in my frontal lobe.
You need to rest now and do things you really enjoy and everything will be all right. Your soul has matured, your spirit got stronger and the language of your heart began to speak. When you are confused, be assured that you are just about to have a breakthrough.
Judit

A lovely comment. You wrote in my language, I understand every word and agree with you.

Just as I always say, if you talk to people in a certain may they talk like it back. Which is what I have always practised in the group with certain conductors...and as I wrote in another posting also with the children http://konduktorin.blogspot.com/2008/08/on-not-having-to-shout.html

Yes, I was very tired and experienced all you described and the problem with the language righted itself very quickly and I was very pleased it had happened. As I said at the end of the posting yet another learning process adding to all the learning that went on in Budapest!
It is nice to "meet" you at last,
Susie

Hi Susie,
Your post made me to smile a bit. I did not smile at your "disability" but mine. How often am I in this kind of situation? All the time since strangely at my place of work in the classroom and office we do not have a single Englis speaker (all of them are Hungarian), my family is Hungarian and they always wish to speak, listen to the radio, watch TV in Hungarian (blame the modern world), so my mornings are pretty often just the same you have plotted in your post. :))Laci