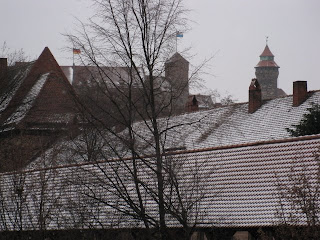 In contrast to Bondi Beach here is the snow in Nürnberg at the top of my street! November 22nd 2008

Nürnberg isn't actually a chocolate box city it is the city of the Lebkuchen, the cake like biscuit that the many factories around the city have been baking since the summer. The gorgeous spicey smells have been wafting through the nearby streets to wet our appetites for a long time now.
The Christkindlsmarkt is built, the stall holders are filling the shelves with everything which glitters, sparkles or smells of the spices on which Nürnberg built up its trade hundreds of years ago.
This Friday the Christkind will once again make her opening speech from the top of the Frauen Kirche (the Church of our Lady), the christmas market will be declared open and the crowds will celebrate the beginning of advent with Gluhwein, Fruchtebrot and of course "drei in Weggla" (that's frankonian for three Nürnberger sausages in a round roll).
I am determined to be packed and ready for off by Friday so I can enjoy two evenings at the Markt before I go to Norway. When I return I will be just in time to take up my post on the charity stall which sells stars made by kindergarten children from all over Bavaria. It is the highlight of advent for me.