More thoughts from Würzburg and beyond 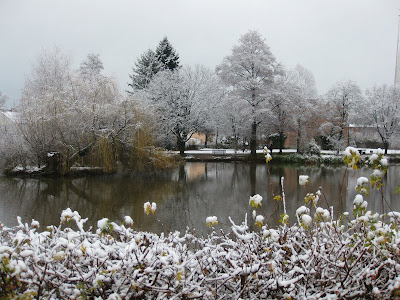 Since I have a colleague I worry less and less about the future of the conductive work that I have developed over the past seventeen years here in Germany. Am sure she will do her best to continue developing the centre here conductively in her own particular way with her own brand of conductive upbringing.

At the Würzburg congress we heard the voices of two teenagers. Who have lived a conductive life since they were three years old.

How approaching adulthood they spoke about their own concerns, which reflect the concerns of many of their peer group.

Both of these young people described with enthusiasm their conductive lives. They talked about their hopes and successes and achievements that they believed would not have been possible without a conductive upbringing.

There came a point in their talks when I got the impression that the hope, that one hears about so often in a conductive family, became dulled. Not gone but the outlook for them did not look as positive as it had down at the beginning of their conductive upbringing.

There was a bit of the feeling of despondency as to what they would be able to do in their adult life.

The one talked about all the places that she had visited where she could possibly live as a young adult. Places that use lifts and hoists so that the opportunity for her to get onto her feet each day would be taken away. For this young lady the prospect of not being physically active took priority over the type of work she would be able to do.

A young man spoke about the bleak prospects for him as a disabled person finding work on the open market despite his conductive, active life.

What was most distressing for me as a part of their audience to hear was that like many of my own clients their main concern for their futures was at an everyday level.

They only knew conductive living. Being as active as possible, being as independent as possible, and taking part in life.

What was on offer to them when school was finished, for one not much that did not include the use of lifts and hoists and physical inactivity, although at the moment she assisted to climb the stairs on her own two feet to bed!

Conductive centres are often too small to offer what these young people need. Perhaps that need will be someone to assist them in university studies, the opportunity to live in a shared flat with non- disabled people, the opportunity to work on the open market, a place to live away from home where freedom of movement is not removed because of the numerous health and safety rules.

I had many thoughts about our young people while at the Würzburg Congress. I was reminded once again of our responsibility always to be looking further ahead. not to next week or to next year but to the next ten or twenty years.

We must always be aware of the need in a conductive centre, or as a private conductor, to consider what we must provide when a seven-year old is seventeen and also much later is twenty-seven and fifty seven. A conductive lifestyle can not be allowed to come to an end just because the client can not carry it on totally alone, without assitance.

The youngsters should go home at 16.30, but now that they are learning to go home alone, they tend to hang around a bit, especially when there is something else going on that interests them.

We have organised the Friday afternoon children’s group so that we always do something arty crafty at the end. This means that the young adult who comes to me after work can join in creating and then continue his session when they have left.

This works really well and as usual the children love having young adults joining in their activities.

Last Friday Little Princess did not want to go home. She was all dressed up, blinky lights on the rolator switched on, and thick winter jacket zipped up to the chin with reflector waistcoat over the top, but she stayed and stayed and stayed. She waited around just watching what I was doing with my young adult client so long that I had to phone her grandmother to say that she was safe, she just did not want to go home yet.

My new colleague was there too waiting to open the doors for Littlie. Littlie was toointerested by my work to leave and both Évi and I were too fascinated by the scene to bring it to an end.

It is rare to have a seven-year old who walks home alone after a session with us, but to have one in our midst who does not want to leave, well for me that really is really something specially. Not a first as the little boys in Norway never wanted to go home either all intent on dinosaur building, but that is another story already told. This story is about something different, it was not painting and modeling that was keeping Littlies with us so late, she was wide eyed and taking in everything as she stood watching.

In the end I had to send her away as Évi, my colleague, wanted to go home too.

Afterwards Évi sent me as email message asking me what I thought had been happening with our Littlie as she watched in fascination my work with adults.

We had both been wondering the same thing. Was it just fun to be there, something different to see, or was she thinking about her life in the future?

I think it was a bit of both but more of the last.

I really do hope that before this and the other littlies get much older we will have developed all manner of provision for them to ease their fight to reach high school and university. Maybe we can prevent Littlie and her peers from worrying and thinking: “What is going to happen to me in the future?”
Posted by Susie Mallett at 00:00