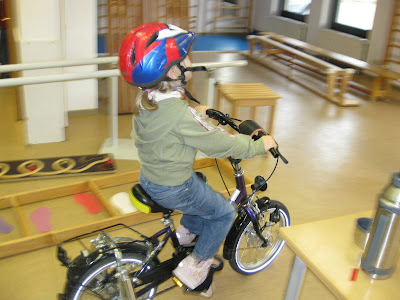 "Will there be a new bike in time for Christmas?" 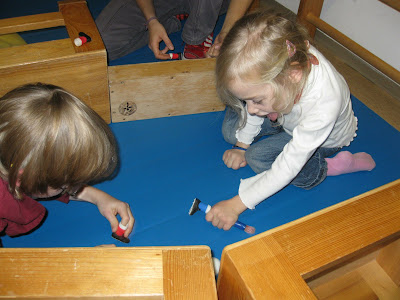 My blog is being neglected, I am very sorry Blog and Readers. I do have an excuse I have been going to conferences and meeting, going to work and the thing that is taking up all of my time writing a book!

Well that exaggerating a little bit I have been doing all those things but the book is probably more like a booklet , as it is not printed yet I do not really know how to describe it.

Anyway books and work aside there is still time after a longer sleep than usual, and with now a morning off, to post just a snippet to say Évi is brilliant. Èvi is my now not so new colleague. And to say how wonderful it is not to work on my own every day.

She was so good this afternoon.

I could talk to the shoe, splint, wheelchair, cushion and wedge maker and anything-else-we-may-need man, who is called Ariel. The man who loves our children so much. While we talked about what everyone needs over the next few months the children still had someone with them, they were still learning through having fun and games. Évi was there.

Ariel is the best person for the job of providing our clients with what they need. It is lovely when he comes into the group, the children gather around him as if he has a bad of goodies to dish out. The goodies that he dishes out are time and understanding. Then later after all the measuring and fitting he brings something that makes life a bit easier for them all. A bike some shoes or a seat to rest on on the way home with the rolator.

Little Princess was in a dilemma today. She loves to be with Ariel, she especially likes his name! It reminds her of the mermaid! She knew that Ariel had driven over especially to fix the screws back in the ankle joint of her splint and also to fit a little seat on to her rolator. She wanted to be with him but she also saw that new games were being played on the mat. I suggested she asked if she was needed anymore before she scampered off to join the others. This she did, Ariel understood her words and he replied that yes he did need her. There they sat together for another ten minutes, he got her to turn the spanners while he fixed a seat on her rolator which she then she hoped up on it like a little bird! She stopped her shaky movements as she helped with the spanners by leaning her head on his arm. Team work! What a lovely feeling for them both. Littlie was so relaxed as she knows the shoe man since she was two years old and he enjoys her company very much!

It was a lovely scene to observe. Just like when we do our arty holiday projects that are on a larger scale than the normal art that we do it was an opportunity to watch and take note of how a child uses what she learns in our daily activities in the more “everyday” activities in life.

Sorry but the photos are not of this story, those are still in the camera, but of last week when the same man came to repair a bike for one child and put Little Priincess on it to see if it was the next stage up for her. It was, look how straight her back is!

She looked at me as Ariel helped her on it, this was less help than she needs to get on the awkward trike that she has. Now she was on a two wheeler for the first time in her life, still with stabilisers, but a bike like her brother’s all the same.

She said so clearly “I am scared”, so Ariel held her tight. It only took two metres before she was off on her own and the owner of the bike was running behind her, hot on her trail in case she rode off with his bike!