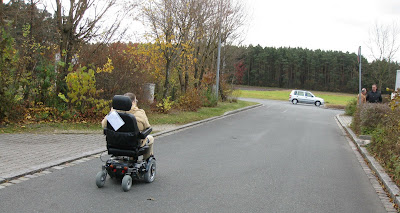 It was not my stroke client this time who was lost for words, but me. All that I could say was that she was really brave and that it was amazing to me to observe and think about how much progress she had made over the years that I have known her.

This all made her smile even more than she already was doing, but I still felt like these were not the words that I was searching for to express what I was feeling. She was doing a lot better than I was with the words but we were both smiling from the inside. Several souls were really happy.

My client found the words to tell me that she felt like she had found her feet in her world again, and had regained a freedom of movement that had been denied her for many years.

I had the great pleasure on Friday morning of accompanying my client and her husband on a trip to take a look at electrically powered wheelchairs and scooters.

It had all been carefully planned. We had made several phone calls then we waited until the appropriate articles were available for testing. My client planned the timing so that she and her husband could pick me up from the train then drive us on to the suppliers, where we would have time for her to do a couple of test runs and still get me back to work in time for the arrival of the littlies who were anticipating their half-term cooking and painting action.

It could not have gone smoother. All of her well-thought-out plans meant that my client was so relaxed and enjoyed the morning more than she had imagined.

She was exhausted from all the planning and the thinking but she had done it all alone. Yes, her husband was there to drive the car and ask a few technical questions. Yes, I was there too, having been briefed in the car and on previous occasions as to what it was exactly that she was after and what she wanted to talk about.

I was not needed but I was looked to on a couple of occasions for back-up and encouragement. I think that my client would have thought of the technical questions too. It is amazing that this was the same lady who ten years ago had been told that she was not eligible for speech therapy any more, even though she still could not speak much, and not at all in sentences to strangers.

What a brave lady

Here she was in a strange place, with strangers, making big decisions. All these things bring about a state of excitement, anticipation and worry that usually cause her whole being to change, from inside to outside. In new surroundings, in demanding situations, she looks and sounds completely different rom how she does when she is going about the life that she knows, with people whom she knows and trusts.

These are just the same reactions that we all have but as with many stroke clients, it is so extreme that the spasticity increases to such an extent that movement can be restricted and painful, and speech becomes very difficult too.

On Friday I was amazed and, as I said, speechless too

My client just sailed through the hour, test-driving one vehicle after the other as though she had a joystick in her hand and a motor under her seat every day. In fact she had never been in an electric wheelchair in her life and up to a year or so ago would never have been able to organise a morning like today’s to try these ones out. The thought would not even have entered her head that she could whiz around in a high-speed wheelchair.

She took to it all like a duck to water and amazed the men who were looking after her so brilliantly. They were kind and patient, they had gentle voices, listened carefully to her every word, and understood so well.

You could say “Of course they did, that is their job” but, as my client explained to me in the car later, she has been treated very differently at other providers of equipment for people with motor disorders. She was impressed with the service hat she received, just as much as the men were impressed with her.

My client did more than whiz around inside the store and out, trying out all the vehicles that they had on offer. Some with fat wheels at the front and others with fat wheels at the back. Some with padded-leather seats. Some just ordinary manual wheelchairs with a motor added. My client not only test drove the chairs and scooters, she tested herself too, to the limits.

She was able to discuss the differences in the various models and explain the different feelings that she had when riding in them. She asked the questions on charging batteries and about availability of ramps to get such a heavy machine into the back of the family car.

And in the end her husband said if to her that if she wanted one of the “machines” then it was up to her to make the decision. He had every faith in her too.

And decide she could!

She decided there and then on a second-hand model with a very comfortable seat, and with fat wheels at the front that meant the spasiticity did not shoot into her legs as she bumped up a small kerb. She decided on a ramp for the car and even asked for a new seat belt as the one that she had used was to difficult to fix with one hand.

She even made all the financial arrangements herself! All done in less than an hour!

I was really impressed. I can tell you. I know that she has been considering this for a long time from the comfort of her own home, talking about it with me and with her husband, but even so she was wonderful and I told her so. She was so good at questioning, and comparing, and deciding.

We all went home smiling, it had been a successful day all round.

Come spring my client will be experiencing a freedom of movement that she has not felt for fifteen years. Not only a freedom of movement but much more. She will have independence, she will not have to rely on her husband for so much, their relationship can change, maybe something will return to how it was before the stroke occurred.

Having a chat as we go

Her not-getting-any younger husband will be able to walk beside her when they are out and about, my client will not have to worry about him getting exhausted by pushing her, and they will be able to communicate side by side. This was something that they discussed in the car afterwards. They both said how awful it was talking ahead into thin air, knowing that the person pushing probably could not hear. The person pushing leaning over to listen makes pushing almost impossible. From now on, walks in the forests will take place side by side.

(Yes indeed, there are many walk-ways in Bavarian forests that are wheelchair-friendly.)