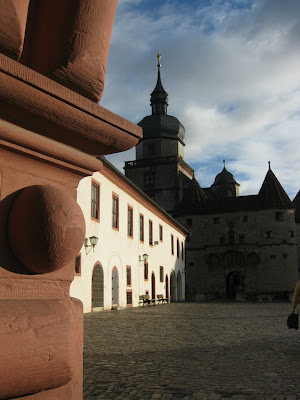 "Where we spent the weekend!" 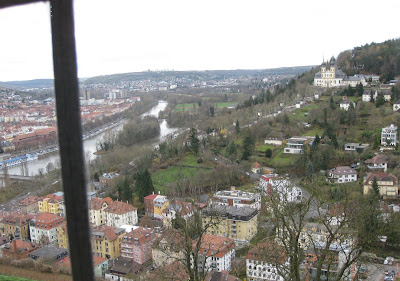 "The view from inside"

A flying visit to the Fortress-Würzburg

I was at the Conductive Congress in Würzburg at the weekend. It was a flying visit as I had to work on Friday and I had an appointment with the designer of my poster and book on Sunday morning.

I arrived in time on Friday evening in time to hear the last thirty minutes of the podium discussion, when the chances for integration and inclusion were being discussed. The title of the discussion had also included the questions: “How much inclusion do we need?” and “How much independence will be accepted?”. I did not hear anything said about these two questions, perhaps I missed that part of the discussion.

I did hear reference made two or three times to the methods used in Italy, but these were not elaborated on in the part of the discussion that I heard, perhaps someone had mentioned them earlier.

I wonder whether publications about the conference in the Internet or in hard copy will reveal this to me later.

I was given a folder as I registered that contained a pen and a notebook and a couple of brochures from one of the centres hosting the conference. Unfortunately it did not contain a book of abstracts. I had found the abstracts extremely useful after the conference in Munich in 2008 as I could look there for information later about the presentations that had been in a different parallel session to the one that I was in, and also to look up names of people I had heard speaking.

There was no mention during the conference that there will be anything produced later so it does not look too hopeful that I will be able to read about the presentations that I missed on Friday afternoon.

During the morning on Friday there were visits to the conductive groups in Würzburg, some of which I already know so I was not so disappointed in missing this.

It was a bit of a shock as I walked in to find that my face looking at me! Not only once but in one of the brochures four times. Actually it was not only my face, therewere pictures of me working with a stroke client.

I have mentioned before in my blog how it has been a surprise for me on other occasions to suddenly discover myself in pictures on yje conductive websites pf centres where I have worked over the years. Now I have that surprise again, discovering myself in brochures.

We, as I expect everyone does, have to have consent to publish pictures of our clients, but never once has anyone asked my permission to print a photograph picturing me at work. It is not that I do not want my photograph in print, it is that I want any photographs used to be telling a story that needs to be told, and not just a snap-shot. I wish to be asked, just as we ask the clients, so that I can decide. Sometimes a photograph really does not illustrate what is intended to be said. The ones that I saw at the weekend are not bad, although one or maybe two could have been being saying it a lot better!

I did recieve an apology, as soon as my shocked face was noticed!

"Conductive" should mean bringing together

I will write about some of the things that I heard during the weekend separately. Just for the moment I want to say that I think that the general feeling for those attending was positive, though once again I heard that, although interesting, this "conductive congress" conference failed in the same way as have many before in bringing together in making a connection between conductive pedagogy and the different themes of the other presentations.

I was told today that this had been the job of the moderators, but there was often no time for this to happen between the presentations.

Although time-keeping was quite good by conductive-congress standards, time was still too short.

Time was also cut from the important tea breaks, when we usually get to swap information with our colleagues who work all over the country.

Unfortunately too, on the Friday evening, the coming-together snacks and drinks that had been planned, where more “info-swapping” and “getting-to-know-you” could have taken place, were cancelled at the last minute. The conductors missed this most of all I think. We really enjoy coming together once a year and finding out what the others are up to. Many of us have been in Germany for a long time and have worked with each other from time to time over the past fifteen years. Sadly we ended up in small groups in several different restaurants throughout the city, which was a shame.

I have just been informed that all in all the majority of people were happy with what they saw and heard, and that is the main thing. Perhaps we will be able to read other thoughts on the conference elsewhere on the blogosphere. I met several conductors who work in Rosenheim, a link to their blog is to be found on Conductive World. Perhaps they will write something too.

I will write more about the individual presentations that I heard on Saturday, as I get time during the next week.

When I was a little boy, and for many years after, I was subject to the powerfl myth of German organisation and discipline 'usually stated as 'Teutonic' or even 'Prussian').

Over recent years, I see, Anglo-Saxon revisionist historians have been working hard to indicate that this was just that, a myth, and that the Germans were infact far less organised and disciplined than, er, the British.

Reading yout blog over ghe last couple of years does rather confirm the latter impression (or maybe this is just 'the South').

I do hope that there will indeed be papers to go in your folder, and be more widely shared.

Oh yes, la bella Italia. Italy has always figured highly in the pantheon of he inclusion movement. But I have never heard it reported what actually happens when his child or that actually requires educating. Perhaps if you had arrived earlier you would have been told. I wonder...