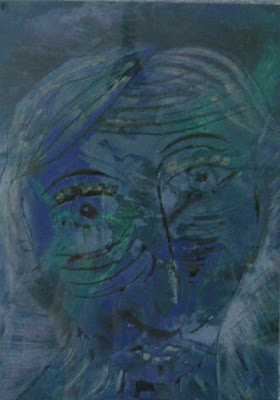 I was freezing having cycled here, there and everywhere between jobs in a fine, grey drizzle.

In the end I jumped on a tram in an attempt to get warm. The tram-ride was not long enough to warm me but it did mean that I got to my next appointment with over an hour to spare. Plenty of time for a slice of Grandma’s cherry, crumble-cake and a huge milky coffee in the village café.

Warm and cosy again I got out the English newspaper that I had stuffed in my pannier just-in-case. Having read the Nature Watch on the tram, all about buddlia and butterflies, or rather a lack of butterflies, in Scotland, I got stuck into another Guardian Weekly favourite: the section on “Books”.

This week there are several reviews that tempt me to buy. There are also a few more that are interesting enough in themselves, but I do not feel that I need to own the book. They impart enough information to learn something interesting, actually more than enough, so I do not feel the need to have the book on my own shelves.

One such review was by Wray Herbert from the Washington Post. He reviewed a book by Cordelia Fine, a cognitive psychologist interested in gender and neurosexism. It was not this subject that caught my attention but this paragraph:

“Fine isn’t opposed to neuroscience or brain imaging but she is ardently opposed to making authoritative interpretations of ambiguous data.”

There is an awful lot of such interpreting going on these days; maybe more of us, including me, should be more ardent in opposing it.

Fine uses her detailed explanation of the technique of brain scanning using fMRI imagines to illustrate her position of ardent opposition! Pointing out that they are not videos of the human brain in action and are many steps away from being the hi-tech gatherers of brain-activity data that some people believe them to be!

She describes the pictures of head shapes with colours superimposed on them. She goes on to explain that the colourless images measure the magnetic quality of the haemoglobin (translated as the oxygen in blood that is being consumed in different parts of the body) and not much more. If the scientists see something on the image that is not as they expected it to be they “slap some colour on the regions of the map: hot vibrant colours if it is more than expected; cool hues if less.”

Blobology is the name that Fine has given to the production of such colourful “works of art” as produced by fMRI scanners and to the subsequent interpretations of them as if they have something to do with human behaviour and can in some way justify certain behavioural patterns.

Wray Herbert the reviewer says that the mission of this book is to demolish sloppy science, “brain scams” and “neuro-nonsence”. He tells us how critical and intolerant Fine is of the intellectual leaps that are taken from analysing “iffy brain data” to making statements about specific behaviours and using the interpretations as justification for them.

Fine does not only criticise the use and interpretation of fMRI brain scanning but also other so-called research that has a huge “scientific” influence on arguments about human behaviour.

She illustrates her arguments further by tracing the roots of neurosexism back to the mid-nineteenth century. Then the political motives for pseudo-science were to restrict higher education and the right to vote to the male of the species! Apparently in 1915 six differences in the brains and CNS of men and women were catalogued and it was claimed by neurologist Charles Dana that they proved that women lacked the intellect for governance and politics.

Of course none of this was true. Cordelia Fine is asking us to question if what is happening now is any different to what the Victorian scientists were claiming. Although their crude techniques have been replaced by modern scanners it does not mean the interpretations are any truer.

Fine warns us that once wrapping a tape measure around a head was considered modern, scientific and high-tech. The "scientific" blobs of colour on an fMRI head-like image could end up in the same intellectual scrap heap as the Victorian's tape measure.

It is hard as non-scientists to be as critical as we need to be, but we must be careful and not accept as gospel all that we hear and read.

There are lots of conferences coming up. Let us not forget these warnings from Cordelia Fine. We must not let the blobologists fill our heads with "scams", "nonsense" and "iffy brain-data" produced by "sloppy science", telling us that behaviour is about colourful blobs of warm and cool hues.