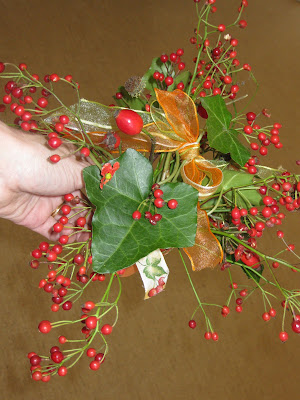 I had a lovely experience in the last few minutes at work yesterday. Actually, as always, I had many lovely experiences all day long but one sticks in my mind as it was the last thing that happened and rather special. It reminded me of my sister's twins communicating at play before they could really speak. I always watched them; I was entralled by such things long before I was a conductor.

Little Princess did not want to go home

She had missed a lot of her time for doing exciting things yesterday, as she had an appointment with our shoe-man who plastered her legs up to her knees and gave her some catalogues to choose some tattoos from, to make the new plastic splints pretty. With this all done, plus a new seat fixed on to her rolator, for perching on when in need of a rest or a chat with a friend, she got on with her "work".

She still had painting and making autumn deco on her agenda. There was lots to do.

It was going-home time when she asked if she could stay longer to finish off!

I have never had that happen before. This littlie goes home alone so all that was needed was a quiuck phone call to stop Mum worrying where she was.

She was just about finished ten minutes later when Big Brother arrived at the window. They started communicating with each other through the glass, understanding perfectly what the other wanted to say, although not a sound could be heard.

Littlie had been what we call "Mund faul", mouth-lazy. It had been one of those days when she had found it just too much like hard work to speak. We all get days like this and for this little athetoid girl it is very understandable that sometimes she does does not have the energy any more, especially if she is not understood first time and has to repeat the whole sentence again. On such days she uses a nod of the head and a blink of an eye with those who she knows will get the message this way.

When Littlie was in the Kindergarten she could not speak very much but Big Brother always understood each sound that she made and this is how it still is today. There are more sounds and lots of words and really long sentences coming out of Littlie's mouth these days but even so, watching these siblings communicating with each other is still very special.

When the crafty work was over and Littlie was all dressed up ready to go, goodbyes said and out of the door, I watched them meet up outside, through the closed window.

Getting home was slow going. First there was the hockey to play; brother had a hockey stick and a tennis ball, and inline-skates on his feet. Then there was the chatting. Littlie stopped walking each time it was her turn to speak, it is easier for her this way.

I could see the movements throughout her whole body as she tried her hardest to get the words out. She was squealing with delight at whatever her brother told her when he responded immediately to her words. And so continued their slow journey home.

When talking and listening are a two-way process

There was no "Pardon", "Please say it again", "Sorry I did not understand" to interupt this conversation. The whole thing flowed like the game of hockey that they were playing, the banter going back and forth with the same rhythm as the ball.

It was a delight to see that there are times for Littlie when speaking is communicating and not just a frustrating time trying to tell someone what she needs.

A lovely end to a lovely day, except of course there was still the experience of the lovely moon and sunset to come! (See the previous posting.)
Posted by Susie Mallett at 21:58