Let me draw you a story. 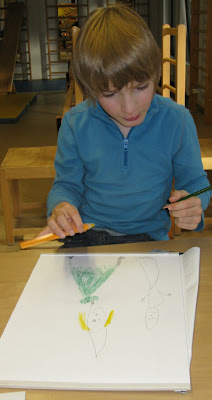 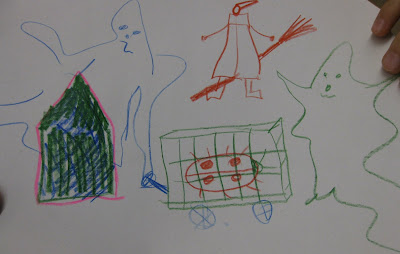 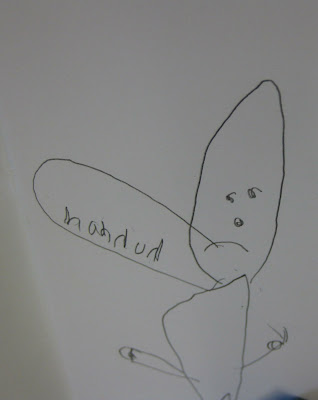 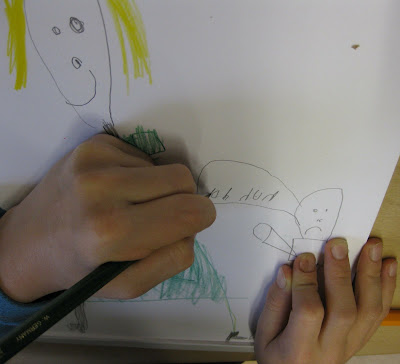 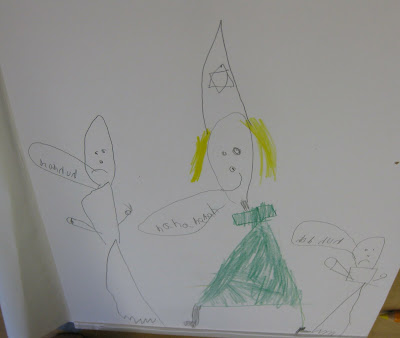 When I am alone with a certain little boy he starts to talks to me instead of to himself. When he is with other children he rarely speaks directly to them but chatters on mainly for his own ears. When he is with me he calls my name, he asks me questions, and the continuous chatter to himself dies down as he communicates directly with me.

Sometimes I get treated to the most interesting stories. At the quiet time at the end of the day this week, we sat down as we talked and drew some pictures.

It is ghost and ghouls time of the year again and he told me some amazing stories as he drew his "I love Halloween" pictures.

The Halloween Green-Red Witch and the Ladybird.

The good, green-clothed witch wanted to help the ghosts at first but how can she be a good witch if she helps ghosts capture ladybirds? Oh no, for the witch to be good she would have to help the ladybird instead. But alas, at the last minute the ghosts put a good-witch shield around the darker- than-night house where the ladybird would be taken in the cage on wheels to be imprisoned.

The ghosts could get into the house as they could vanish into thin air but the green-clothed witch could not.

The poor ladybird would have to remain in the house until he was nothing but bones.

It was a really lovely experience, especially when suddenly he realised what I was doing. He abandoned his art work for a while and encouraged me with mine, becoming more precise with his descriptions and praising my drawing skills!

The story-telling now continued with his eyes glued on to my developing picture-board of what he was telling me. His eyes gleamed with delight as his witch in red clothes appeared beside the four-spotted ladybird, and the shield that was bright pink and luminous, was draped over the darker- than-night house.

The narrator took my picture of his story home with him but not before I had snapped a shot of it. It was lucky that I did. I have suspected for a while now that this little boy has a difficulty in some situations and with certain tones, in telling the difference between red and green.

Now as I look at my photos of our drawings I realise that something is amiss. The picture that I drew and the story he told do not match.

Green or red? That is the question

At school, like in most schools these days, the blackboard is a green board and if the teacher uses a red chalk on it this child cannot read what she writes.When we play with red and green beanbags on a neutral background he confuses the colours; if we play with them on the blue mat he does not mix them up.

I think it is time to do a bit more finding out. I hope that thiswill reveal exactly where the problems with his vision lie