There are still people who think that the Internet stops people relating to each other! 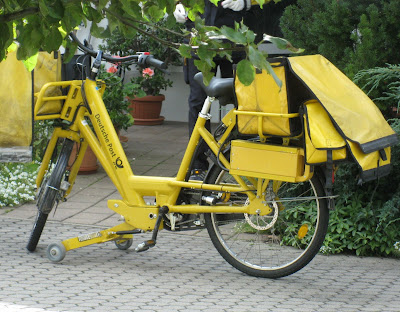 "Snail Mail" by Susie Mallett October 2010
What a wonderful bicycle with which to deliver communications!

Communicating across the Atlantic

Over on my other site Anne Wittig and I spend some enjoyable moments discussing conductive upbringing. I am delighted and I think Anne is of a similar opinion.

Communicating “down the road”

On this site earlier in the week I wrote about a book that I had read about while on a train whizzing across town for a house visit. The book is “Mein schneller Papa” by Bianca Jahnke-Oppold:

Yesterday morning I was checking emails and getting ready to go out at the same time when my email box pinged me back to the computer and there was an email from the author!

Short and sweet she said just:

We exchanged a few emails in short succession, the results of which are that two books are in the post, I have a new project to begin with my children ( more about that later), and there is going to be a link to my blog on Bianca’s site.

The Internet certainly does not stop people relating to each other! Unless of course one sits there playing games on it all day. It opens up whole new worlds.

Some of my new worlds are just down the road like the one that opened yesterday through “Mein schneller Papa”, some are across the Channel, more are across the Atlantic and others are on the other side of the globe.

The more people that begin to write, either with comments on the existing blogs or by setting up their own sites, the diversity of interests, and the knowledge there is to be shared, increases.

This blogosphere-world still needs to move on, it needs to attract more communicators, but it is certainly a step in the right direction and I can say that without a doubt the quality of my practice and of my bits-in-between-life have improved since I have been communicating in this way.

What I find interesting is that despite the brilliant idea from Norman of a social networking site to get the Hong Kong-congress-goers communicating it is not working very well. A few of us are talking to each other but of the hundreds of people registered to attend in just a few weeks time there still less than fifty on the site and far less than this communicating in public, other than just to say hello.

This is a shame. A four-day congress is a very short time in which to find out who people are and then find them for a chat. The networking site is there so we can get to know each other in advance, make appointments to meet people and save precious and expensive time!

So come on all you congress-goers lets get talking! The internet really is a good way to begin relating to each other.