Not enough hours in a day 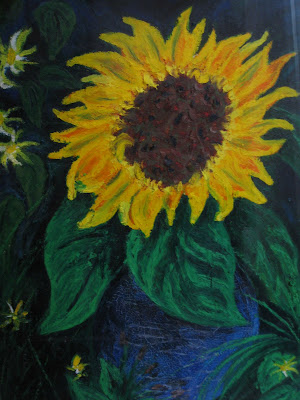 But always time for a paint, a bake and a read!

I just got home after four different sessions plus lunch-time helping out in the Kindergarten. A busy and long day as Tuesdays always are, but even more so today due to illness and meetings.

Best-bit of the day part one

One of the best bits of the day was a lull in the storm at around 11.15am when a two-and-a-half year old and three five-year olds joined me at the table to paint. Silence fell as paint, paintbrushes, water and paper created the basis for a very enjoyable thirty minutes. Thirty minutes in which children who had never spontaneously produced images on paper before drew circles that joined together to make cars and elephants. The nearly three-year old had a lovely time just painting pink.

Painting, as I have know all my life, was just the remedy for producing a calm that is always much needed by these children before lunchtime.

After lunch hour in the Kindergarten and then meeting two new children and their mums in the afternoon, my evening adults "workers group" arrived. That is the group I have been working with for many years that is made up of adults with cerebral palsy who come to me after a day at work. Last Tuesday we had decided to do some baking this week. I had forgotten but they had not!

Best-bit of the day part two

My forgetfulness did not matter as all that we needed was in the cupboard. We made bread. Soon the place was smelling of the second best bit of the day, freshly baked bread.

Not only had those adults got the evening all sorted they also got on on their own, reading the instructions and mixing the dough, later rolling it into balls to make delicious rolls.This is something that a couple of years ago would just not have been possible. It is never too late, the spiral keeps on spiraling upwards!

Several good bits of the day

There were several other good bits today. For example there was the child who ate more of his breakfast than he has ever eaten before and drank all of his bottle of fruit tea, and the moment when another child nearly tied his shoes laces all alone and shouted out: "I can do it!" There was the moment when a new child sat at a table on a chair for the first time in his three year life and made his mum really happy.And then there was the autistic child of five years old who I met with his mum for the first time today. He turned to his mum when leaving and said the first words I had heard him utter in an hour: "Am I coming here again tomorrow, or Saturday?" I wish he was, the problem is our Kindergarten is full to overflowing.

Best-bit of the day part three

Best-bit three was when I came in to the house at nine this evening, fourteen hours after leaving in the brightening dark of this morning.

At the bottom of the wooden staircase that leads up to my flat is a lovely block of wooden letter boxes, just about a hundred years old. They have really tiny openings and most of the post received by the residents usually pokes out for all to see or is precariously balancing over two or three overflowing boxes. As I came in through the back door, having wrapped my bike up for the night, I noticed that I had some precariously balanced snail-mail!

I had received the snail-mail that I had ordered last week and have been eagerly awaiting ever since, more reading material.

I now have an interesting little book, with lovely pictures of children just like I was, doing things just like I did in clothes just like I had, but in a very different country from my own.

My copy of "Two Worlds of Childhood" by Urie Brofenbrenner has arrived. I read the first chapter in the bath!

As I said at the beginning of the posting even when there are not enough hours in a day there is always time to paint and to read, and sometimes time to bake bread as well. Painting and reading are possible in the bath, I am not so sure about baking though!

I will write about whatever it is that goes with the wonderful pictures of children that remind me of me over on my offspring upbringing blog, just as soon as I have read this, the third best bit of today.
Posted by Susie Mallett at 22:47