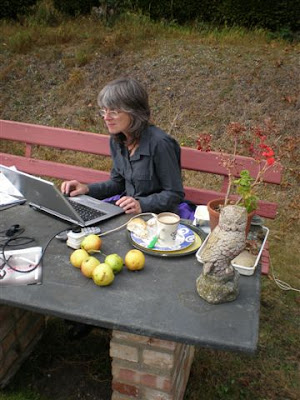 The most perfect place to work, the garden, by K. L. Mallett

Dear Susie,
I love reading your posts, mainly because I can find the essence of CE, the spiritual angle which is beyond research and academics. I believe that the fact that you are an artist yourself, makes it easier for you to convey what you call 'the soul' of CE and I call it the 'art of CE'.
Thank you for that
Rony

Thank you for this very valuable post. This is what actually happens in CE (at least I strongly believe it and do it that way) but for some reason the official recognition world wide (a positivist point of view) always sweeps away that most imprtant content of it.
CE never was and I hope never will be physiotherapy and/or positivist.
If only we did not taken like a physio-stranger most of the time!
Anyway, thanks again.
Laci