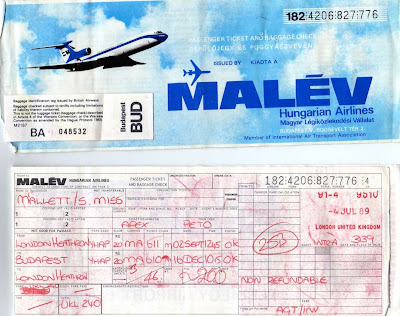 Today is a very special anniversary for me. On September 2nd, 1989, I flew to Budapest for the very first time.

Twenty years ago today my life changed for ever.

There is so much to say about this time and over the coming few weeks bit by bit I will be sharing some of it with you.
I will be calling this series The Budapest Years. Many of the notes for this series have been in my notebook for over two years now. I wrote them before I even thought of having a blog. Today has seemed like just the right time to dig them out and do something with them.

The fall of the Berlin Wall!

The fall of apartheid, Nelson Mandela on the road to freedom, talks with both Botha and de Klerk (actual freedom on Feb.11, 1990)!

The end of an old world and the beginning of a new one.
For me too!
Posted by Susie Mallett at 21:01

Gosh! This has made me shiver!I don't know what to say, neither do I know how I feel about it. But it has put a lump in my throat.
It doesn't make sense, does it?.. ...my apologies..

I of course look forward to reading this series.